On December 31st, a new Honor model, Honor YOK-AN10 (Honor V40), successfully passed the Rheinland’s safe fast-charging certification. The certificate shows that Honor V40 will support wireless fast charging up to 50W. The Rheinland certification is the latest listing for the Honor V40 as its official launch draws closer.

According to a new offline poster that appeared on Weibo, the Honor V40 has commenced pre-sale. From the poster, we can see that the display of this phone has a large and attractive curvature. The poster also shows that pre-sale is active on all major offline stores. If all goes according to plan, this device will be official on January 12th. However, we expect that the sales will go online probably after the launch. 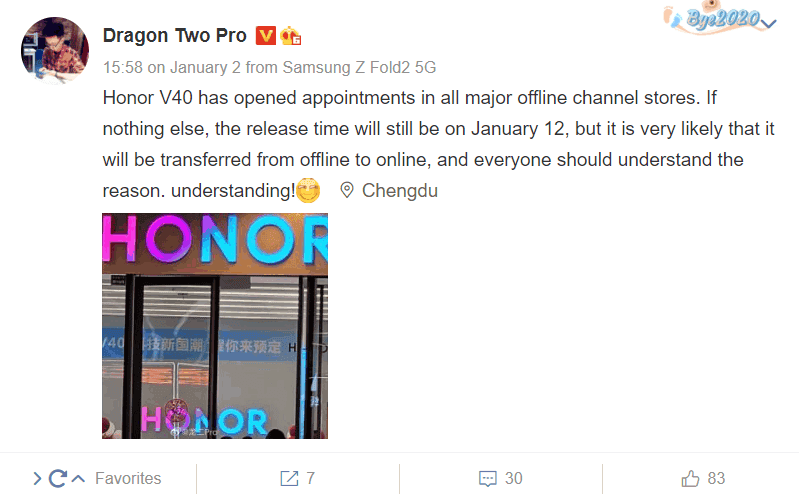 The Honor V40 recently passed through TENAA and got a couple of other certifications. This raised speculations that the smartphone will launch soon. According to the network access certification, the Honor V40 comes with a standard Huawei HW-110600C0x charger. The charger supports up to 66W charge pump fast charging. In addition, this smartphone runs on the Android system but there is no confirmation if it supports GMS.

This smartphone will be the first official device from Honor since its independence from Huawei. Recall that Huawei recently sold Honor as a result of the ban from the U.S. government. The company is now trying to continue its business as an entirely independent brand. However, it will retain much of Huawei’s workforce. ost likely, its designs and features will be similar to what Huawei is offering. However, it may not face the same ban situation as Huawei.