Several years ago, HTC was one of the most notable smartphone makers in the Android side of the coin. Furthermore, the company was a pioneer in new technologies and design languages. Remember the Ultra-Pixel technology that made use of pixel-binning way before the advent of 48MP cameras? The company shipped popular flagship devices like the HTC One and One M8. Unfortunately, the company failed to keep up with the competition and lost its space in the smartphone segment. Despite its bleeding smartphone business, the company still is alive in the market. Last year, it released two smartphones just to tell its fans that it hasn’t given up the market. This year, apparently, the company will come with more devices and the HTC Desire 21 Pro 5G will be the first.

Today a couple of leaked images surfaced revealing the HTC Desire 21 Pro 5G and its unusual design. Well, unusual for HTC devices, but the overall language reminds me of a certain Redmi Note smartphone. The big novelty here is what seems to be a carbon fiber texture in the back. The leaked images were spotted earlier today, but the original source shortly removed them. Thanks to SlashLeaks, we can still have a good look at the upcoming’s handset design.

The model number for the HTC Desire 21 Pro 5G is 2AQAG100 and it comes with a Triple-Camera setup coupled with a LED flash. This camera sits in a rectangular cutout just like most 2020 smartphones. The main camera is a 48MP sensor, and we assume that the other two stand for ultrawide and macro/depth shots. In the front, we can spot a large panel with a center-aligned punch-hole cutout. 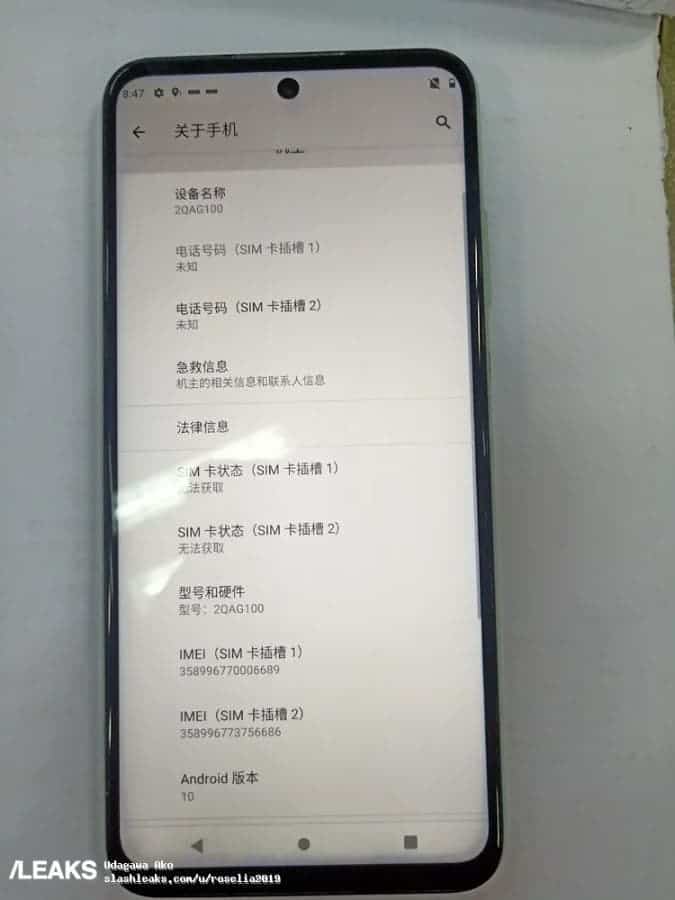 This seems to be an IPS LCD panel, after all, it has thick bezels all around. The bezels easily deliver the fact that this is a mid-range smartphone. A curious fact is that it seems to be running Android 10 OS. Hopefully, this will not be the case when the phone gets released. After all, we’re 2021, and launching a phone with 2019’s software is the wrong way to make a comeback. As we can’t see a fingerprint scanner in the back, we believe that it will be sitting at the side doubling as a power button. We can also see the charging port in the bottom, hopefully, one of the USB C kind. Judging by the specs that we can spot in the leaked shots, this is a mid-range phone.

Apart from the leaked photos, we don’t have many details about the HTC Desire 21 Pro 5G. Hopefully, we’ll get more details in the coming weeks. After all, the leaked shots suggest that the device isn’t away from a launch. Also, since this is the Pro variant, we assume that HTC is also preparing a vanilla version of the phone.

Previous Xiaomi Mi 11 Lite photos and specifications have been leaked

Next Realme V15 will arrive with a 65W fast charging support!