Oppo’s sub-brand Realme is now gearing up for its upcoming smartphone under the V lineup. Yes! we’re talking about the awaited Realme V15. The Chinese smartphone maker will launch the device tomorrow in its homeland. Since the official launch is right around the corner, the company’s VP Xu Qi Chase decided to tease a key aspect of the smartphone.

Realme V15 to arrive with a 65W charging, teaser suggests! 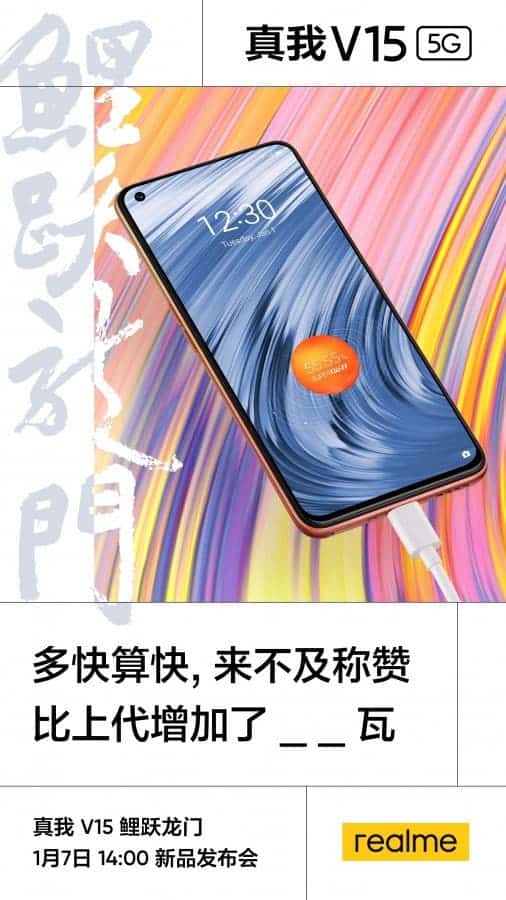 In a recent teaser, Realme’s VP Chase has revealed that the Realme V15 will arrive with up to 65W super-fast charging. This means that the top-end version of the lineup will arrive with 65W fast charging capabilities. The teaser further reminds us that the review will see its official unveiling on January 7 at 2 PM local time. Sady, Chase hasn’t shared any other relevant information regarding the smartphone.

When it comes to Realme V15, the smartphone maker has remained quite on the “sush” side. The company hasn’t really detailed any specs or internal hardware about the V15 smartphone. In the past, Realme has shared a few images of the device on social media. All these images confirm that the device will arrive with a punch-hole cutout on the top-left corner. On the rear, there is a triple camera setup on the back housed inside a rectangular module.

While Realme hasn’t really revealed much about the device, the previous leaks and rumors are here to help us with our expectations. Realme V15 is rumored to feature a MediaTek Dimensity 800U chipset along with an in-display fingerprint sensor. Various reports also point towards the addition of 5G connectivity support. Considering the device is arriving with 60W fast charging support, we’re expecting the company to throw in a large battery as well. The smartphone should also run on the latest Android 11 operating system with the company’s custom skin on top.

With that said, we have less than a day till the official unveiling of the smartphone. This means soon everything about the Realme V15 smartphone will go official and the same will put an end to all the rumors and alleged specifications.