With the Redmi Note 9 5G escaping China, Xiaomi’s sub-brand is ready to focus on the next big thing – the Redmi Note 10 series. The work in these devices isn’t a secret as the Redmi Note 10 4G passed by TENAA’s website some months ago. The device will pack an Octa-Core processor with 2GHz, 8GB of RAM, and up to 256GB of Internal Storage. It will draw power from a 5,900mAh battery and will also have a 6.53-inch FHD+ display. In fact, the device is very similar to the Redmi Note 9 4G that is set to reach global markets as Redmi 9T. While not much light is shed on the vanilla Note 10, a new leak brings fresh information about the upcoming Redmi Note 10 Pro.

A Redmi device bearing the model number M2101K6G has just passed by FCC. According to XDA-Developers’ report, it’s the Redmi Note 10 Pro, and unlike previous expectations, it is a 4G device. We don’t know if Redmi is planning a 5G variant yet, but that is possible. As far as the LTE variant is concerned, it will bring dual-band Wi-Fi, Bluetooth, NFC, GNSS support and will include the FM Radio feature. Moreover, the listing confirms MIUI 12 straight out of the box. 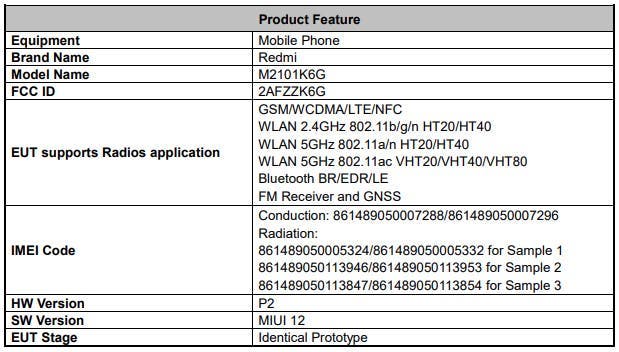 Unfortunately, FCC is rather vague about the device’s specs. However, XiaomiUI Telegram has leaked additional details about the device known as Redmi Note 10 Pro. The leak suggests that the device bearing the M2101K6G model number bears the codename “sweet. It states that the device will pack an IPS LCD screen and will have a 120Hz refresh rate with MEMC tech. The 120Hz became a standard among Xiaomi’s premium mid-range phones. It’s great to see that it is finally making way to the global Redmi Note series. The leak also suggests s a 64MP main camera. It will sit along with an ultra-wide camera, macro lens, and depth sensor.

The device will draw power from a 5,050mAh battery which is a standard for Xiaomi smartphones nowadays. Under the hood, the phone will bring the Qualcomm SM7150 platform. This is the Qualcomm Snapdragon 732G, which so far is only available in the POCO X3 NFC. Just like the POCO X3, the Note 10 Pro will have a global variant with NFC and an Indian version without it.

Considering the leaks, the Redmi Note 10 Pro is on par with what we can expect from a 2021 mid-range phone coming at a cheap price tag. The chipset may not be as powerful as the 5G Snapdragon 7xx family, but it’s beyond the Snapdragon 720G that is available in the Redmi Note 9 series and on its Realme competitors.

We’re not sure about the phone’s design. However, won’t be surprised to see another Mi 10 Lite wannabe. In other words a 6.67-inch display and a circular camera shape.