Back in 2019, Xiaomi introduced its Redmi K-series made of a premium mid-range smartphone and a flagship killer featuring a high-end Snapdragon SoC and other competitive specifications. Later on that year, the company introduced the Redmi K30 and K30 5G as two competitive mid-range phones followed by a Redmi K30 Pro in March 2021 featuring the Snapdragon 865 SoC. Since October last year, we’ve been hearing many rumors suggesting the arrival of the new Redmi K40 series after the Mi 11 series debut. Now, it seems that the new devices are closer than we expect. The Redmi K40 and Redmi K40 Pro will go official as soon as in the next month.

The high-end model will sport the Qualcomm Snapdragon 888 and will probably be Xiaomi’s second, or third if the Mi 11 Pro comes first, a device with the flagship chipset. Redmi General Manager Lu Weibing took to Weibo to reveal some of the key specs for the highly-anticipated Redmi K40 smartphone series.

As aforementioned, the Redmi K40 Pro will keep the recurring tradition of the series packing Qualcomm’s latest flagship chipset. In this case, it will be the Snapdragon 888. The company will also employ a flat display that is touted as “the most expensive flat screen”. However, we’re not sure of what exactly the company means by that. Could it be a flat AMOLED display to justify the “most expensive” title? Or is it coming with an LCD panel, but with a 144Hz refresh rate? We know that in any case, the device will come with a high-refresh-rate. After all, the Redmi K30 Pro got mixed reception due to the 60Hz panel. According to 91Mobiles, the phone will pack a 120Hz AMOLED display. 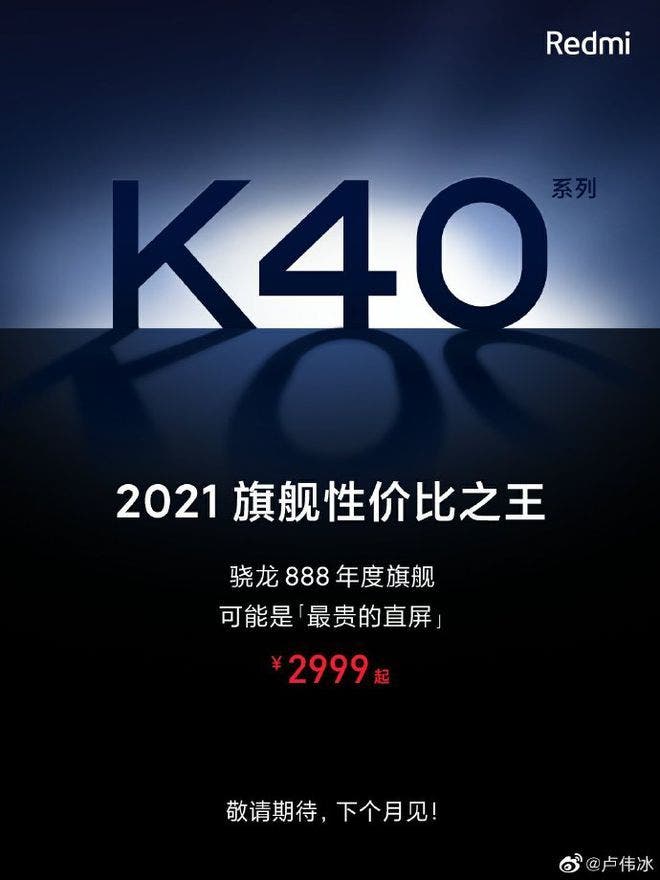 The GM also confirms the arrival of a battery bigger than the 4,000mAh on the Redmi K40. Previous leaks have been suggesting a 33W fast wired charging support. If we take recent smartphone launches, then Redmi is likely to bring a 5,000mAh battery on this device. Several devices in the Redmi, Mi, and POCO series have been coming with a battery bigger than 5,000mAh. We know that 33W fast-charging is safe for a battery of this size, so we’re betting on this capacity for now.

Last but not least, the Redmi K40 Pro with the Qualcomm Snapdragon 888 will launch for CNY 2,999 in China. That is just around $463 which makes it a really good deal for those who want to experience the performance of the new chipset. The Redmi K40 may come with MediaTek’s upcoming 6nm chipset. We expect more details to pop out in the coming weeks.