Realme is quite busy focusing in the arrival of its 2021 flagship that, for now, goes by “Realme Race” codename. The brand is also gearing up to bring new 5G mid-range phones in the form of the Realme X9 series. However, this can’t prevent the company from bringing cost-effective handsets under its Realme C series. Today, the company is introducing a new variant of the Realme C12 which has been available since August last year. Meanwhile, the Realme C20, which is the next big thing for the series has leaked in the wild. 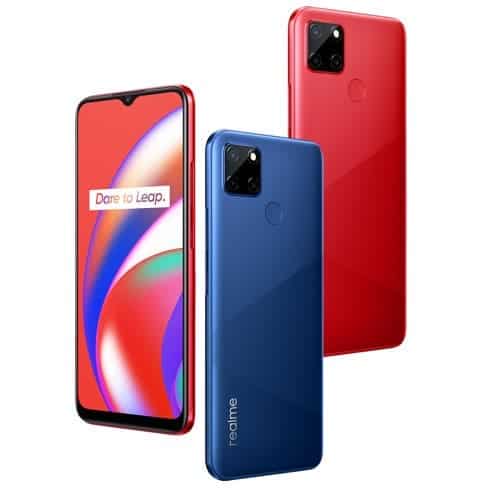 The Realme C12 is getting a memory increment in India. The device has been available with 3GB of RAM and 32GB of Internal Storage. Now, a new variant with 4GB of RAM and 64GB Internal Storage is available in the Indian Market. Customers will need to pay INR 10,999 for the new variant. This is roughly $150 or €122. The new variant is available for purchase through Flipkart and Realme.com. It comes in the Power Blue and Power Silver colorways. After January 20, the device will also be sold across local retail stores.

For those unaware, the handset packs an Helio G35 SoC flaunts a 6.5-inch LCD with HD+ resolution. It also has a 13MP triple-camera setup. The device also has a rear-mounted fingerprint scanner and draws power from a huge 6,000mAh battery that charges via a micro UBS port.

Realme C20 leaked in the wild

The Realme C20 is coming soon as the new member of this cost-effective devices family. While the brand’s Indian branch was busy with the Realme C12 variant, the Vietnamese counterpart has leaked some of the Realme C20 promo materials ahead of its launch. Interestingly, the Realme C12 looks very similar to the C11. It will also come in two distinct colorways – Black and Blue. However, there’s no fancy gradient or finish applied here.

Under the hood, the phone will also pack the MediaTek Helio G35 2.3GHz Octa-Core chipset. So it’s not really an upgrade if you compare it with the Realme C12. The device has just 2GB of RAM and 32GB of Internal Storage. It also packs a dual-camera setup on the rear with a simple 8MP primary shooter. The device draws power from a 5,000mAh battery with 10W charging, so we assume it has a micro USB port. The specs are built around a 6.5-inch LCD with an HD+ screen and a waterdrop notch serving as a house for the 5MP selfie snapper.

The device is yet to go official, however, retailer FPTShop listed it on its website. The device retails at VND2,690,000 ($115/€95). While it does not mention the shipping date, we believe that the device will go official in the next few days.