Honor has been struggling alongside Huawei in light of the US Government ban. The brand suffered attacks on its hardware and software fronts due to the fact that it shared resources with its parent company. However, in November 2020, Huawei decided to sell Honor to a Chinese brand in order to protect the brand from an uncertain future. Now, the deal is completed and Honor is ready to deploy navigate in this market on their own. To mark its entrance in the smartphone segment as an independent company, Honor will debut the highly-anticipated Honor V40 series. The device has been leaking a lot, and as usual, a new leak surfaced today.

A new report comes today from the Chinese tipster “Digital Chat Station”. The tipster shared some tidbits about the device’s front-facing and the battery coming with the new flagship. The device appeared through a teaser post not long ago. According to the leakster, the pill-shaped cutout will house a standard 16MP camera that comes alongside a 3D ToF sensor.

Just like other devices with this sensor, the handset may support advanced face unlocking features. When it comes to the battery size, the handset will pack a 4,000mAh battery which nowadays is just the “standard” for flagships. Unfortunately, only the higher version with more RAM / Storage will support 50W wireless charging. As far as the Vanilla Honor V40 is concerned, the charging capabilities remain a mystery. Other features include a wide 100% P3 color gamut, stereo loudspeakers, and a set of two linear vibration motors that will also come in the handset. 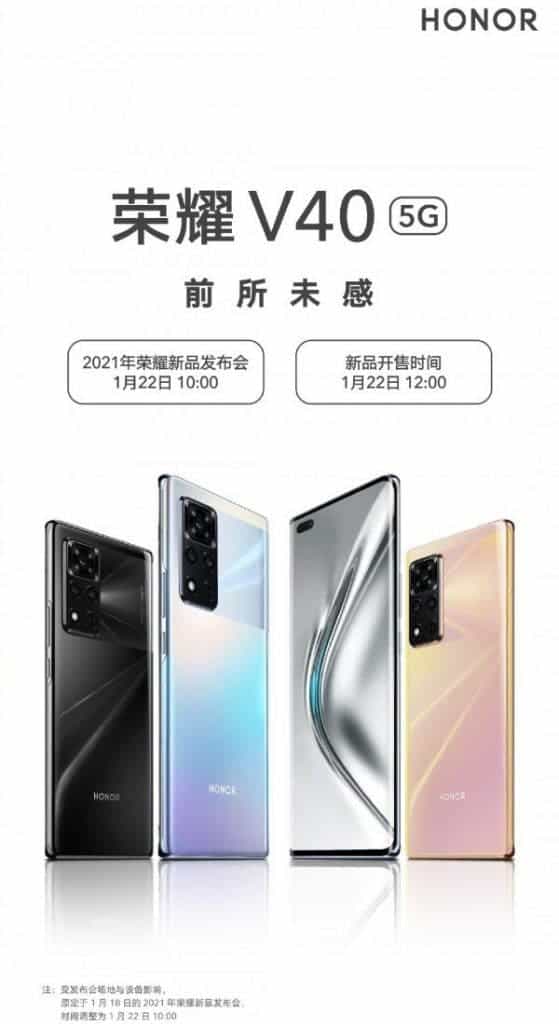 As the leaks suggest, we won’t have an Honor V40 Pro or Pro Plus, model. Instead, Honor will be offering multiple RAM / Storage versions whereas the higher spec-ed version will act as a “Pro” offering due to the wireless charging capabilities, more RAM, and higher storage amount.

Now that Honor is no longer a Huawei-owned brand, it is free to trade with US-based companies. As a result, the future Honor devices will be able to receive Android updates and use Google Mobile services. Yesterday, a leak suggested that Honor is already preparing a batch of Honor phones with Google Mobile Apps. Now, a new report suggests that the Honor V40 will be the first device to pack it. We’re not sure about that. After all, rumors suggest that the Honor V40 was being developed before the split between Huawei and Honor. Thankfully, we will not need to wait much longer to know all details about the handset.

The Honor V40 is scheduled to go official on January 22. We’ll be covering all the details, so stay tuned.