A couple of years ago, MediaTek decided to slow down its chipset business by focusing only on mid-range chipsets with less appeal. However, everything started to change in 2019 when the company introduced the Helio G90T gaming chipset. It brought some fresh air and addresses all the past issues suffered in the Helio P-series. Back in the last year, the company surprised everyone with the amazing Dimensity lineup of 5G chipsets. These chipsets were developed in cutting edge standards and brought performance and 5G connectivity to the market. The Dimensity chipsets are also cheaper than its Qualcomm rivals, allowing bands to popularize 5G to more market segments. Yesterday, the company announced their “next big thing” in the form of Dimensity 1200 and Dimensity 1100 CPUs, both bringing performance and power-efficiency thanks to 6nm nodes. Shortly after the release, Redmi has revealed it will launch the first phone featuring the powerful platform.

We don’t need to make much effort to guess that this device is part of the Redmi K40 series. The announcement was by brand CEO Lu Weibing. He also confirmed on his Weibo profile that the company is gearing up to enter the gaming smartphone range. It is also in the works and should arrive this year as the company will focus more on e-sports. Worth noting that the executive did not confirm the new gaming handset will feature a MediaTek chipset, but that seems to be the case. 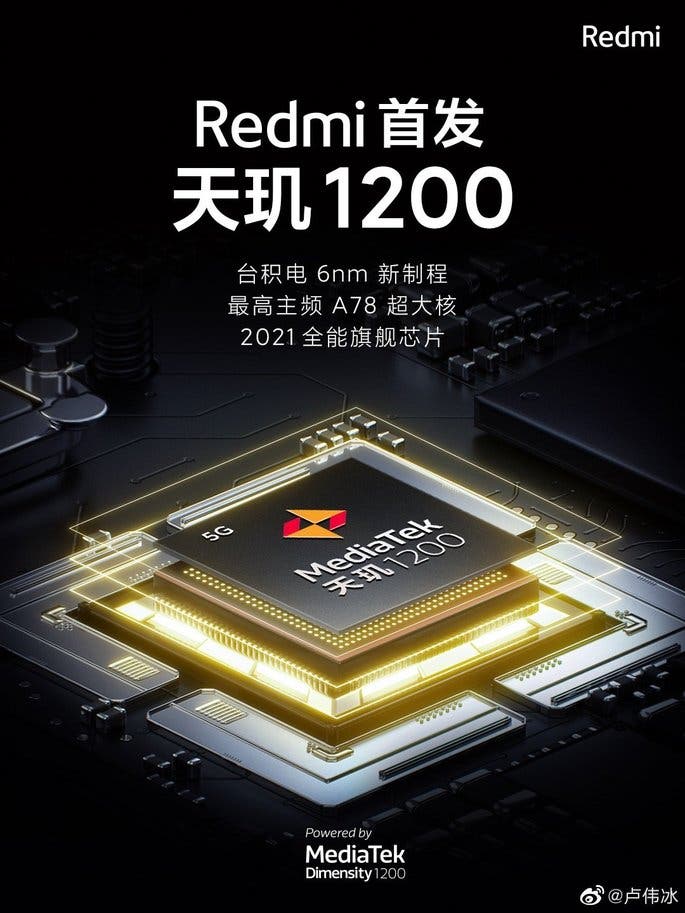 The partnership between Redmi and MediaTek for gaming phones isn’t new. Back in 2019, the company unveiled the Redmi Note 8 Pro with the Helio G90T and marketed it as a gaming smartphone. The device still offers solid performance in most games even today. Of course, the Dimensity chipsets will offer much more performance than the 12nm-based Helio G90T. Moreover, the Redmi Note 8 Pro was not an ambitious gaming phone like the Black Shark. Perhaps, the new Redmi phone will look more like other devices in this segment.

The executive states that thanks to TSMC’s new 6nm process technology, the new handset can have one super-large core with up to 3GHz clock speed, faster 5G connectivity, improved AI, better video and photo content.

Talking about the first smartphone coming, the Redmi K40 should make its big debut as soon as in the next month. He has repeatedly confirmed the series will also bring a Snapdragon 888 chipset. For that reason, we should not be surprised to see another variant featuring the Snapdragon chip. The company could even bring three smartphones this year instead of just two. After all, last year the company played with a Redmi K30, Redmi K30 Pro, and even a Redmi K30 Ultra.