Vivo is gearing up to bring a set of new affordable 5G smartphones this quarter. We’ve been seeing leaks suggesting a new variant of the Vivo S7 sporting the MediaTek Dimensity 820 SoC. Now a Google Play Console listing reveals that the company is preparing a new smartphone with model number V2072A. The Vivo V2072A just got the necessary certification for using Google Services and Apps. Apparently, it’s launch is closer than we think.

According to Google Play Console listing, the new Vivo smartphone will boast the MediaTek Dimensity 1100 SoC paired with up to 12GB of RAM. This chipset was released a couple of days ago alongside the MediaTek Dimensity 1200. The duo of chips is the company’s response for the flagship market made on TSMC’s 6nm process and bringing cutting-edge ARM cores. The Dimensity 1100 has 4 x ARM Cortex-A78 cores clocked at up to 2.6GHz plus 4 x ARM Cortex-A55 power-efficient cores clocked at up to 2GHz. This chipset has an ARM Mali-G77 MC9 (9 Cores) meaning that this chipset also has enough power for games. 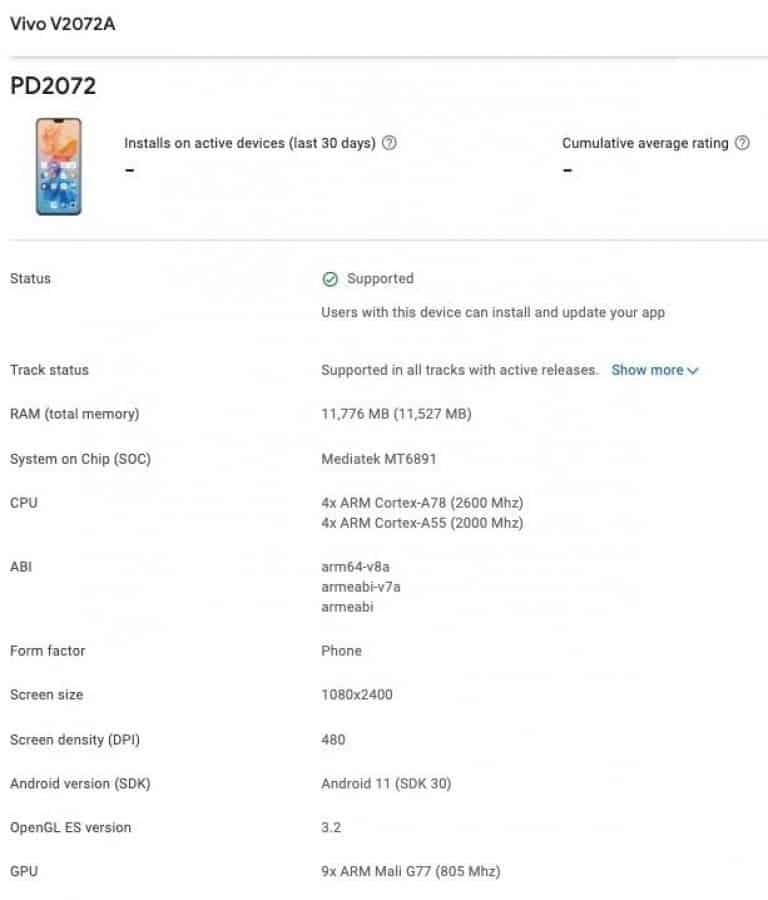 The listing also gives us a first glimpse of the handset’s display. Apparently, the Vivo V2072A has a wide notch. So far, Vivo and Apple are two companies sticking with this design approach. We believe that the Chinese brand will use this solution to house a secondary camera. So far, the company launched a set of smartphones last year with a wide notch. The Vivo S7 is one of them and brings a dual-camera setup on the front with a main 44MP camera and an 8MP ultrawide sensor. Perhaps, the Vivo V2072A will also pack this 44MP camera.

The display will have a 1080p resolution. Right now, it’s impossible to state if this is an AMOLED or an LCD panel. However, the first option seems to be more plausible. As we can see, the device has a standard power button and not a side-mounted fingerprint scanner. Considering the choice of a powerful chipset, we believe that this is a premium device. So it will likely have an in-display fingerprint scanner, something that can only happen if it has an AMOLED panel.

Some rumors suggest that this device belongs to the upcoming Vivo V21 lineup. It’s impossible to affirm this right now, but we do know that it’s coming for global markets. The device has Android 11 straight out of the box and that means OriginOS running on top.

Previous Carl Pei unveils "Nothing" as its new company

Next The Number of Internet Users Worldwide Reaches 4.66 Billion