The report shows that as of January 2021, the world’s population is 7.83 billion. According to a UN report, this number is currently increasing at a rate of 1% per year. This means that since the beginning of 2020, the total global population has increased by more than 80 million people.

Also read: 55% Of Smartphone Users Keep Their Devices For 3-5 Years

Currently, 5.22 billion people worldwide use smartphones, equivalent to 66.6% of the world’s total population. Since January 2020, the number of smartphone users has increased by 1.8% (93 million), while the total number of mobile connections (one person owning multiple devices) has increased by 0.9% (72 million) to 8.02 billion (January this year).

In January 2021, the number of people using the Internet worldwide reached 4.66 billion, an increase of 316 million (7.3%) over the same period last year. Currently, the global Internet penetration rate is 59.5%. However, the COVID-19 outbreak has had a significant impact on the number of Internet users. So the actual number may be higher. 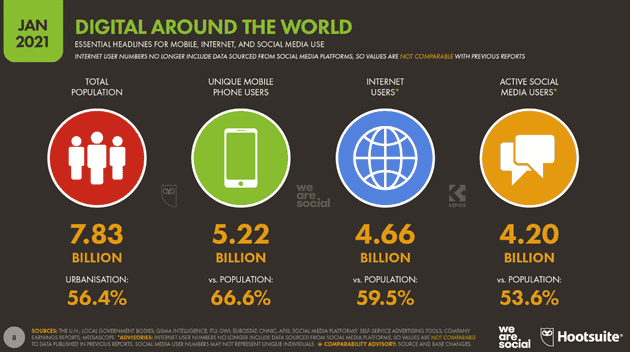 The popularity of social media has soared

The number of social media users has increased by more than 13% in the past year. By the beginning of 2021, there were nearly 500 million new users worldwide, bringing the total number of global users to nearly 4.2 billion.

In 2020, an average of more than 1.3 million new users join social media every day. This is equivalent to approximately 155,000 new users per second.

Filipinos are still the world’s largest social media consumers, using social platforms for an average of 4 hours and 15 minutes a day. This is a full half an hour longer than Colombians, who rank second.

In contrast, Japanese users spend less than an hour on social media a day. It is currently 51 minutes. But this is still an increase of 13% year-on-year.

Smartphones have become our first screen

Another data shows that for the average Internet user, the daily time spent on the smartphone is 3 hours and 39 minutes. In contrast, the total time they watched TV every day was 3 hours and 24 minutes. This means that the current Internet users spend about 7% longer on smartphones than watching TV.

In general, the average Internet users use the Internet on all devices for nearly 7 hours a day. This is equivalent to more than 48 hours of online time per week, that is, 2 days out of every 7 days are online.

Assuming that everyone’s average sleep time per day is between 7 and 8 hours, this means that about 42% of our waking lives are spent online. And the time we use the Internet is almost the same as the time we sleep.

If Internet usage remains at this level throughout 2021, Internet users worldwide will spend nearly 12 trillion hours online this year.

People from different countries spend a lot of time online. Filipinos spend the longest time online, averaging nearly 11 hours a day. Brazilians, Colombians and South Africans also stated that they spend an average of more than 10 hours online every day.

At the other end, Japanese people spend the least online, less than 4.5 hours a day. It is worth noting that this figure in China is also relatively low, with only 5 hours and 22 minutes a day. This is 1.5 hours less than the global average of 6 hours and 54 minutes.

The voice interface is the most popular choice. 45% of global Internet users saying that they have used voice search or voice commands in the past 30 days.

At the same time, nearly one-third of Internet users worldwide also use image recognition tools on their smartphones every month. In Latin America and Southeast Asia, tools such as Pinterest Lens and Google Lens are highly used.

But in the ever-evolving search behavior, the most interesting trend may be the rise of social search. Approximately 45% of global Internet users now say that they turn to social networks when looking for information about the products or services they want to buy.

This number is even higher among young users. Users of Generation Z (people born in 1995 and 2009) said that they are more likely to search for brands on social media rather than on search engines.

Today, smartphones account for 53% of the time spent online globally. But other devices still play an important role in our lives.

Of the web pages visited in December 2020, more than 40% were requested by web browsers running on laptops and desktops. However, this percentage dropped slightly compared to December 2019.

The rise of online groceries and e-commerce

Globally, among Internet users aged 16 to 64, nearly 77% said that they shop online every month.

In 2020, fashion and beauty products accounted for the largest share of global B2C e-commerce revenue, exceeding US$665 billion.

Next Galaxy A72 4G passes by FCC certification with 25W charging

Top 10 Underrated Movies [Stream Them Right From The Post]

How To Buy Gaming TVs And Which Parameters Matter: Quick Guide