Today is the day when most research companies are sharing their results for Q4 2020. In the global smartphone market, we saw an expressive boost in sales during the October-December period with the Apple iPhone series pushing the market forward. Now, Counterpoint Research shared its report on the Indian smartphone market for the last quarter of 2020. According to it, the market only dropped by a mere 4%. While this is a drop, we have to say that it’s not as bad if you take in mind the whole mess caused by the ongoing pandemic.

As a result, the Indian smartphone market shipped over 150 million units. The market grew 19% Year over year in the fourth quarter as Diwali was almost a month later in November. Many companies used the festive season to bring interesting deals. Worth noting, that despite the whole “anti-China” sentiments that are banning Chinese apps all around India, the Chinese smartphone brands still account for 75% market share in 2020. We saw the return of Indian brands such as Micromax, but they still can’t compete with the stronghold built by brands like Xiaomi and Realme. 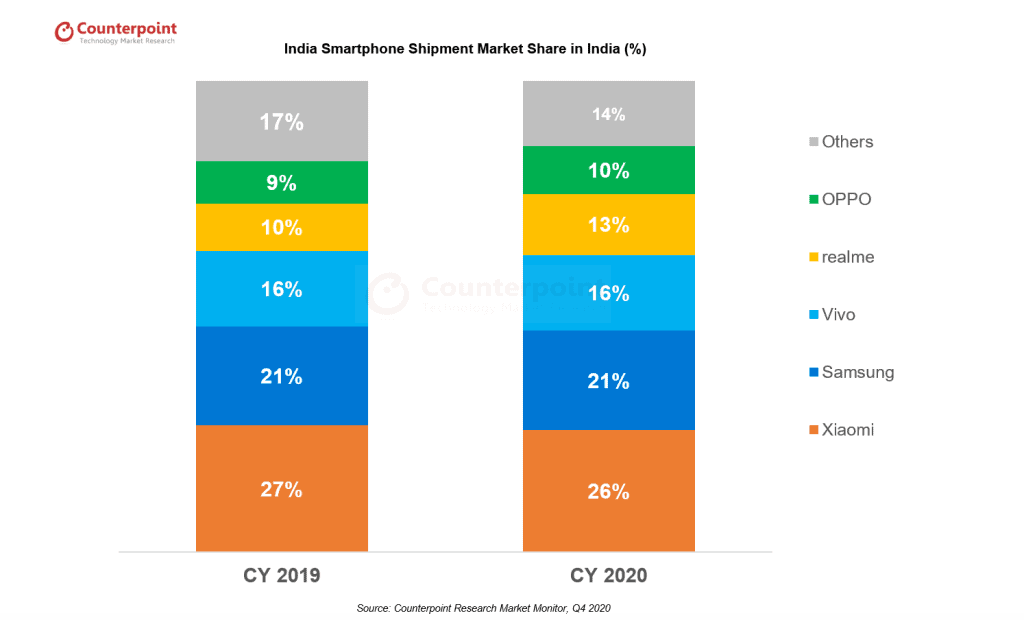 Interestingly, Counterpoint reveals that Xiaomi managed to recapture the top spot in India with a 13% year over year growth. If you recall, the top spot was claimed by Samsung during the third quarter of 2020. Xiaomi managed to recover its place with the unsurprisingly good performance of the Redmi 9 and Redmi Note 9 series. Moreover, the brand is achieving expressive results thanks to POCO’s success in the country. The brand’s best-sellers are the POCO C3, POCO M2, and POCO M2 Pro. The brand recently announced that both the C3 and M2 amassed over 1 million in sales.

Although Samsung lost its place at the top of the Indian smartphone market, the brand still witnessed a 30% year over year growth. The response is due to its recent surge in online channels as well as many Galaxy A and M series phones coming at different price segments. Vivo came third and continued to be the top offline brand in 2020. However, its shipments declined by 13%. We can understand the reason is the restrictions imposed by the COVID that greatly affected offline channels. In the fourth position, we have the world’s fastest smartphone brand – Realme. It shipped over 20 million units for the first time in 2020. In the fifth position, we have Oppo which shipments increased by 11% year over year. The Oppo A53 was one of the brand’s best selling smartphones. 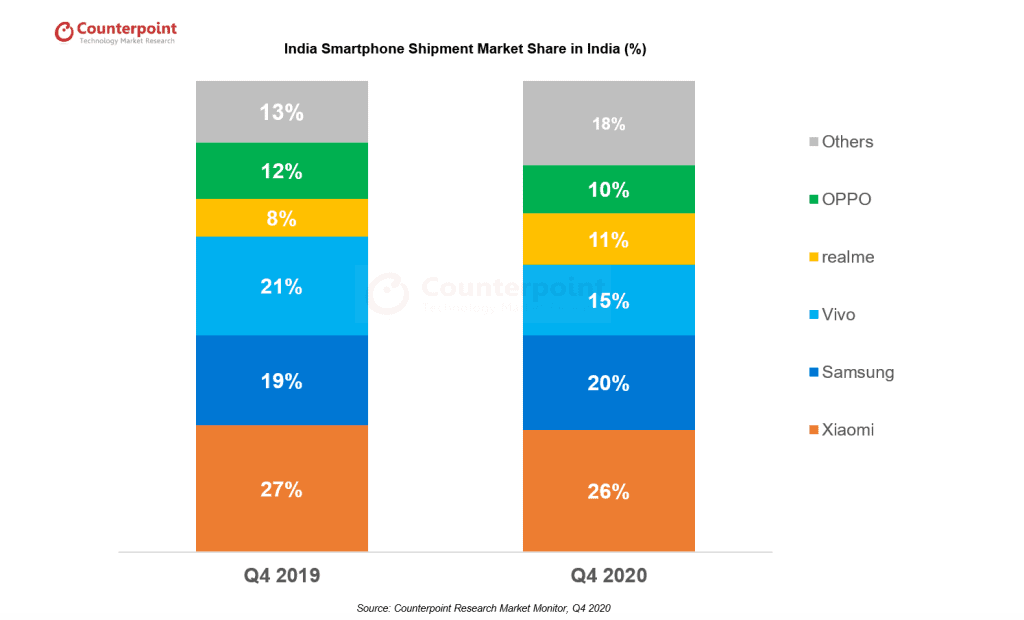 Other brands in the Indian smartphone market like Apple crossed 1.5 million shipments in a single quarter for the first time in India. Perhaps it has to do with the brand’s investments in the country which lowered the price of some iPhones in the sub continent. OnePlus also broke records in the country shipping 3 million units for the first time in 2020. The results have been pushed by the OnePlus Nord. And it shows that betting in the mid-range segment seems to be a good way to push the brand’s expansion. OnePlus experienced a 200% YoY growth in the last quarter of 2020.

Last but not least, we have Transsion brands. After a long time focusing in select markets, the Chinese conglomerate brought its smartphones under Tecno, itel, and Infinix brands to global and Indian markets. In the Indian smartphone market, Transsion shipped over 9 million units. itel became the country’s largest feature phone brand.