According to previous information, the company’s next mid-range smartphone is codenamed Ebba. It should come out to the market under the name OnePlus Nord N1 5G and eventually replace the Nord N10 5G.

The OnePlus 9 series of smartphones is also expected to be unveiled next month, which includes three phones, including the OnePlus 9 Lite, OnePlus 9 and OnePlus 9 Pro. Finally, the company is expected to release a phone called OnePlus Nord SE.

At the dawn of its appearance, OnePlus made it a rule to play in the flagship segment. But last year, the company moved away from this strategy, as the market situation required other actions that would allow it to scale its business. So the affordable Nord line appeared in the model range of the Chinese company.

Now the company is preparing to launch the OnePlus 9 series, which this time may receive three models. In addition to the basic and Pro versions, OnePlus 9 Lite or OnePlus 9E will be released. The first two models will get OLED displays with a refresh rate of 120Hz, a Snapdragon 888 processor, up to 12GB of RAM and 65W fast charging.

The lite version should offer a 90 Hz display and will run Snapdragon 865 SoC. Although, most likely, the choice will fall on a fresher platform. And it may well be the Snapdragon 870 SoC.

Pete Lau said that with the end of January, we’re already a full month in 2021. He ended by stating that the company has big plans for 2021. OnePlus is very popular overseas, so the Tweet got a lot of replies. Some users expressed curiosity, while others started to tease OnePlus. Some said crazy stuff like “acquisition of Apple”; while others stated that this has something to do with the “1+9 series”.

This certainly has to do with the OnePlus 9 series; which is set to make its debut in the end of Q1 2020. This year, the brand will unveil three new smartphones dubbed OnePlus 9, 9 Pro, and 9 Lite. While the two standard editions are set to come with the Snapdragon 888; we assume that the Lite variant will pack the Snapdragon 870, which also makes it a flagship; but priced at a lower price point. 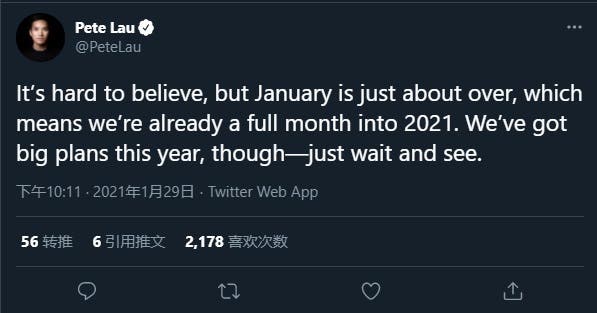