Motorola’s very long-standing G series will usher in new smartphones this year. In addition to Moto G10 and Moto G30, a device called Moto G40 is on its war. According to reports, the code name of the Moto G40 is Ibiza. This device recently appeared on GeekBench with the Snapdragon 480 SoC. This chip is Qualcomm’s latest entry-level 5G chipset. In addition to GeekBench, this device has also made an appearance on Wi-Fi Alliance. According to the latest speculation, this device will likely arrive in India later this month.

The Moto G40 will come with a 90Hz IPS LCD screen. The resolution is still unclear, it may be 720p+ or 1080p+.However, it will support 5G networks although India’s 5G connectivity is not ready. On GeekBench, this device uses the model number XT2137-2. Sometimes last month, Qualcomm unveiled this chipset as its most affordable SoC for the 5G segment. So far, only the Vivo Y31s and Oppo A93 5G have the new budget 5G chipset.

Motorola Ibiza is a 5G budget device with Snapdragon 480 SoC

On the CPU side, the Snapdragon 480 SoC brings the Kryo 460 performance cores based on the Cortex-A76 clocked at 2.0GHz alongside more power-efficient A55 cores working at 1.8GHz. This capable CPU ensured 2,466 points in the single-core test run and 6,223 points in the multi-core department. You may notice that these numbers are too high, take in mind that the test was done on GeekBench 4. The numbers will be lower on Geekbench 5 based tests. Interestingly, the listing also reveals 6GB of RAM which is excellent and surprising. Motorola isn’t the most generous company when it comes to specifications. Perhaps this year the company does not want its devices too much behind the Chinese brands which are also working to popularize 5G. 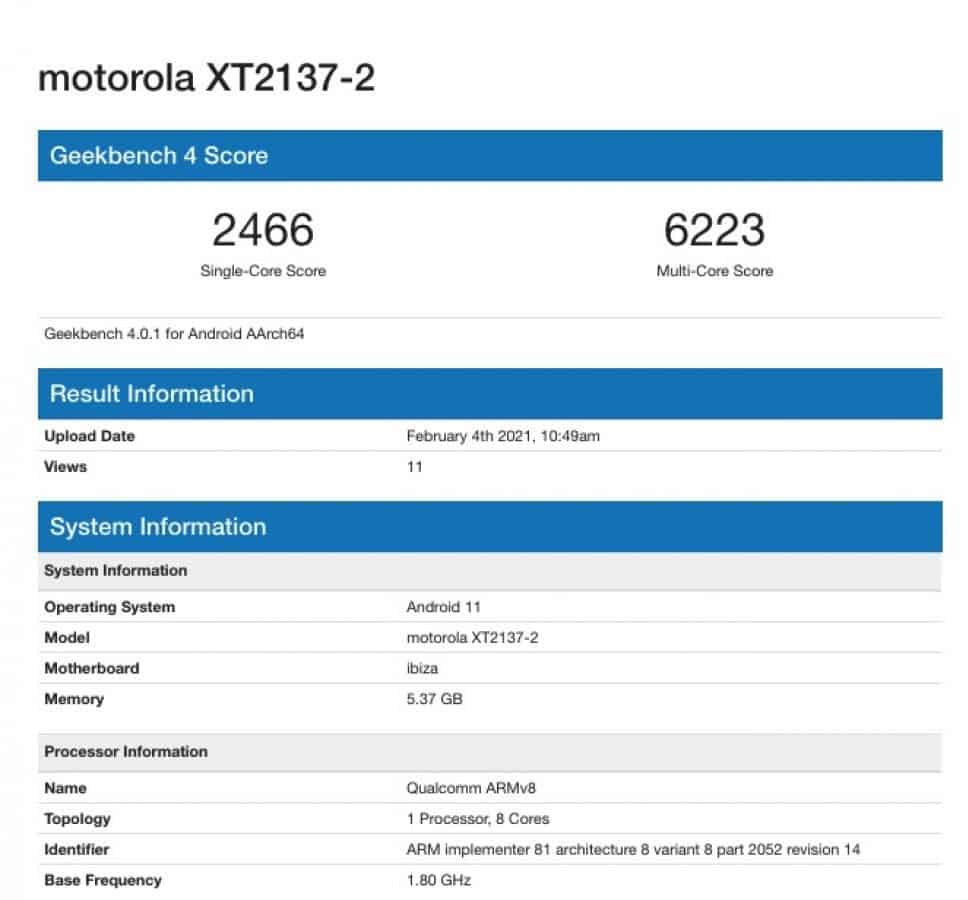 Worth noting that the new GeekBench information coincides with a previous listing on Wi-Fi Alliance. It revealed that the Motorola Ibiza will come with dual-band Wi-Fi (2.4GHz & 5GHz) and will run Android 11 straight out of the box.

For now, we don’t have many specifications to share. However, we expect it to come with a large waterdrop notch display and HD+ resolution. Moreover, Motorola should keep its strategy with a battery bigger than 5,000mAh complete with at least 18W fast-charging. The device may be released alongside the rumored Motorola Capri series.