The analytical company SensorTower has published statistics on the most popular mobile applications in the world at the end of January 2021.

In the past quarter, Telegram became the leader among non-gaming applications, displacing TikTok from the top position. In January, users downloaded and installed Telegram 63 million times, which is 3.8 times more than in January last year. 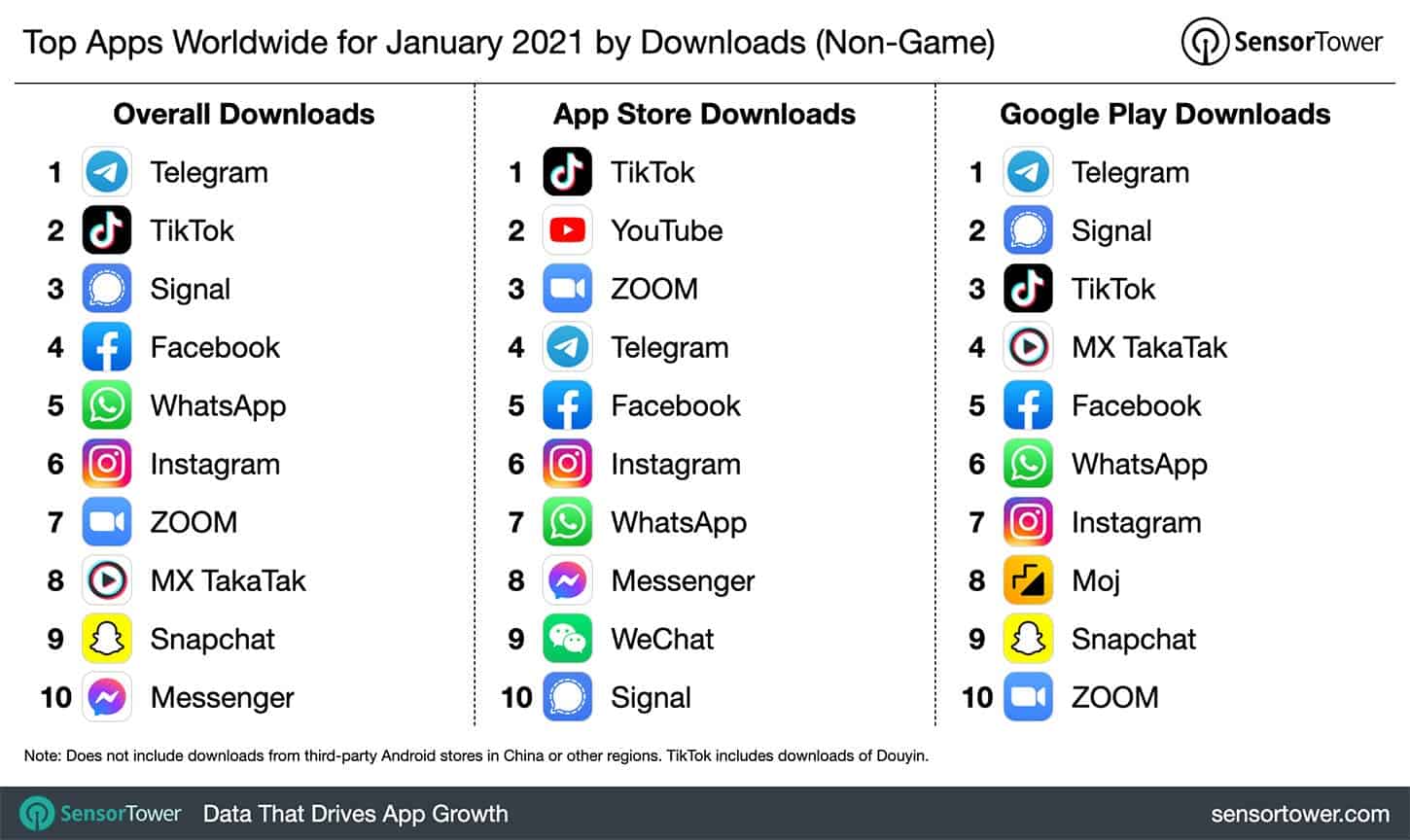 TikTok is in second place with 62 million installs. Signal, Facebook and WhatsApp rounded out the top five in January. Note that the privacy scandal has had a major impact on WhatsApp results. In December, WhatsApp took third place both in the total standings and in individual ratings for iOS and Android; and in November it was in the lead in the total standings for Android.

Signal, on the other hand, did not make it into the Top 10 in December in all three categories. Telegram and Signal are examples of how users react to WhatsApp’s attempts to implement a new privacy policy.

WhatsApp updated its privacy policy on January 6, 2021; and also announced that it is necessary to accept the new terms by February 8; under the threat of losing access to the service. However, after receiving numerous negative feedback from users and criticism from the industry; the WhatsApp team decided to postpone the deadline for adopting the rules by 3 months – until May 15.

Earlier, Telegram already announced that 100 million users joined the messenger in January. Pavel Durov called what is happening “The largest digital migration in the history of mankind.”

Telegram: The import of several chats will be supported soon

Pavel Durov, behind the popular Telegram messenger and one of the founders of VKontakte, spoke in more detail about the new Telegram function, which has already received the nickname “killer” on the network.

Recall that Telegram recently released a big update for Android and iOS with important features – support for transferring chat history from other instant messengers, including WhatsApp, Line and KakaoTalk.

According to Durov, in the future, the function will be much better. Now two chats (existing in Telegram and imported) can be combined into a single feed; provided that the receiving chat has less than 100 messages. The developers are going to increase this figure so that history can be imported into more “ancient” Telegram chats.

There are also plans to provide a free API for third-party developers. This will create tools for importing messages into Telegram “from anywhere”. Durov hopes that this will help Telegram developers “add support for a large number of applications; and also allow users to import several chats at once, or even all at once”.

Moving Chat History from Other Apps

Some users wanted a way to move their chat history from WhatsApp over to Telegram. Two weeks ago I realized this should be theoretically possible, and yesterday we made this feature available on both iOS and Android, together with many other improvements. It also supports migrating chats from KakaoTalk and Line – two other Pre-Telegram apps.

Nothing like this has ever been made possible by a major app, and our team had to implement some serious magic to make it work. We are happy with the result: moving messages to Telegram allows people to save disk space and stop worrying about third-party backups or changing devices.

The feature currently imports messages to the end of the target Telegram conversation, but retains the original timestamps of messages. Some folks have been asking whether we can mix the existing messages in a Telegram chat with the imported messages in one unified timeline. This should be possible if the target chat (where you import messages to) has fewer than 100 messages, so we’ve started to work on that.

We’ll also provide free APIs for third-party developers who want to create tools that will allow users to import messages to Telegram from anywhere. Hopefully, such tools will help add support for more apps than this first wave of three – and also allow users to import multiple chats or their entire inbox at once.

The original meaning of the paper plane on the Telegram logo means “freedom”. For us, freedom of choice and data portability are paramount. People should be in complete control over their own data – and their own lives.