Apple has been very clear about the impact of the iPhone 12 series on some medical devices. Since the launch of the iPhone 12 series models in October last year, Apple has admitted that these devices may cause electromagnetic interference to medical devices such as pacemakers and defibrillators. In January of this year, Apple shared more information, claiming that medical devices such as implantable cardiac pacemakers and defibrillators may contain sensors that respond to magnets and radio devices when in close contact. 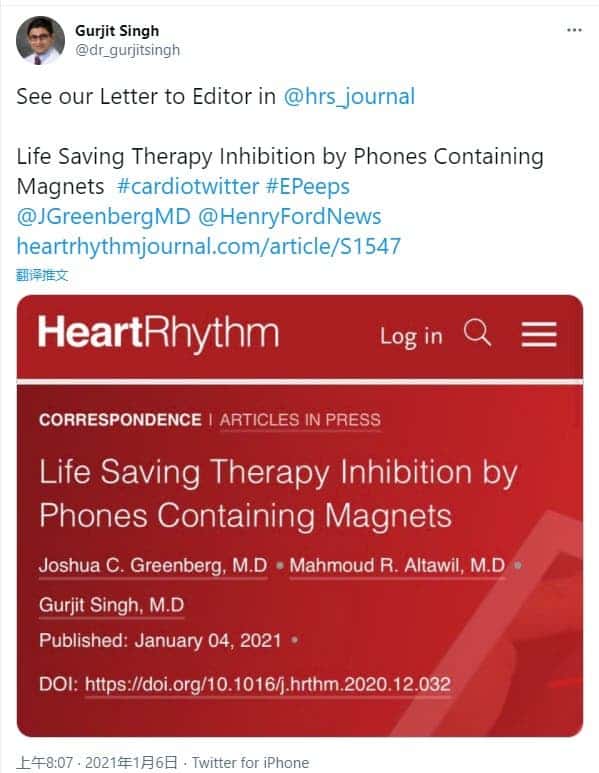 In order to avoid any potential interaction with these medical devices, users need to keep the iPhone and MagSafe magnetic accessories at a safe distance from their medical devices. The recommendation is more than 6 inches / 15 cm; or more than 12 inches / 30 cm during wireless charging.

At the Henry Ford Heart and Vascular Institute in Detroit, USA, a man named Joshua Greenberg and his colleagues, out of curiosity, used the iPhone 12 Pro to do a test to see if the iPhone 12’s MagSafe will affect the cardiac defibrillator. There is actually an effect but what is the extent of the impact?

“The pacemaker is similar. When an external magnetic force interferes with the pacemaker, it will cause the pacemaker to start pacing the heart asynchronously. This will give rise to bad results,” Singh said.

Singh said that at present they have only tested the iPhone 12 Pro on a patient with a defibrillator. As of now, there are no relevant tests on patients with a pacemaker. However, they are applying for approval to continue the research. Testing will still take place around pacemakers and other defibrillators.

Next Xiaomi Mi MIX 4 will surpass all previous Xiaomi smartphones