The year has started, and Motorola is all set to unveil a bunch of new smartphones. The brand started with a new, cost-effective, flagship dubbed Motorola Edge S. The phone was the first handset to debut with the Snapdragon 870 SoC. Now the brand is preparing the terrain for a bunch of mid-range phones with funny Mediterraneao codenames. The list includes Motorola Ibiza, Capri, and Athena. Despite the appeal, the devices will not be actually named this way. Today, a new Motorola Malta emerged and it is allegedly coming as Moto E7 Power. The device passed by Geekbench benchmark listing with MediaTek’s Helio P22 chipset and 4GB of RAM. 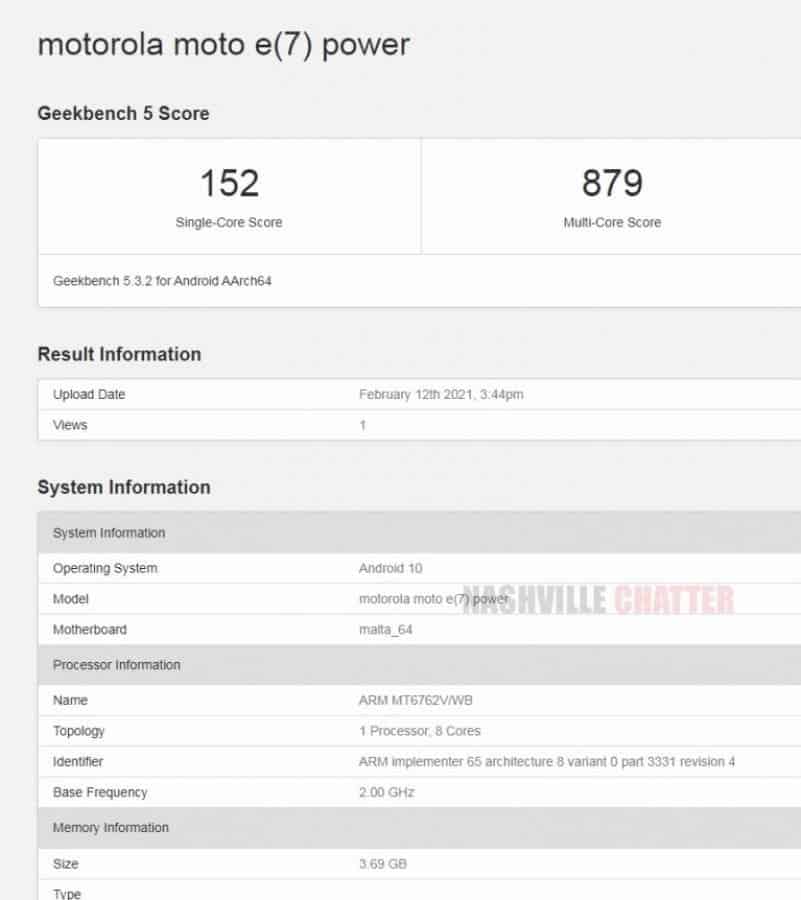 The MediaTek Helio P22 is quite old at this point. The three-year-old chipset brings eight Cortex-A53 cores clocked at up to 2.0GHz. This chipset is built on TSMC’s 12nm process. It’s not the most power-efficient nowadays but is on par with other MediaTek offerings in the Helio G-series. In fact, a previous leak suggests the Helio G25 instead. The chipset has similar specs such as the 2.0GHz frequency and Cortex-A53 cores. It also has the very same 12nm architecture, the improvements are mostly incremental. Hopefully, this is a mistake in the software and the phone will come with the newer offering, which should ensure faster updates. Anyway, the phone scored 152 points in the Single-Core and 879 points in the Multi-Core department. These results are anything but impressive. As we’ve stated before, this architecture is years behind what we currently have in the market.

According to rumors, the Moto E7 Power will be a global variant of the Lenovo K13 which is set to debut in China. Thanks to this, we have some of the key specs of the handset. The Lenovo K13 will sport a 6.5-inch HD+ display with a punch-hole cutout serving as a house for a 5MP selfie snapper. The handset has a dual-camera setup on the back that comprises a 13MP main camera that sits alongside a 2MP depth sensor with LED flash. The back is made from plastic and also serves as a house for a fingerprint scanner. We expect the Motorola logo to be carved in this scanner. The specs may differ depending on the variant, but the design certainly will not be too far from the Lenovo K13.

Thanks to GeekBench, we know that the device has 4GB of RAM. We expect this to come alongside 64GB of Internal Storage and the device will have microSD card support. Curiously, the benchmark listing shows Android 10. We don’t think this will be the case as Android 11 is already a big reality in 2021 phones.

We expect the phone to have a 5,000mAh battery with at least 18W fast-charging. But this is Motorola, so it can have a less capable charging tech.

Next Apple Admits There is a Problem with MacBook Pro: See Which Model You Own