Xiaomi started its 2021 flagship series in December last year through the release of the Mi 11. Instead of bringing multiple smartphones, Xiaomi opted for bringing just the standard Mi 11. Perhaps, this was a way to ensure the first batch of Snapdragon 888 units and also to make the phone the first phone to ship with the 2021 flagship SoC. Now, the rumor mill suggests that Xiaomi will follow its usual strategy by making the Mi 11 bigger with a Mi 11 Pro, Mi 11 Ultra, and even a Mi 11 Lite.

It’s not uncommon to see Xiaomi launching a “Youth Edition” model for the annual flagship. Now, it is time for the Mi 11 to get the same treatment. The device that will reach global markets as “Mi 11 Lite” is appearing in the headlines lately. 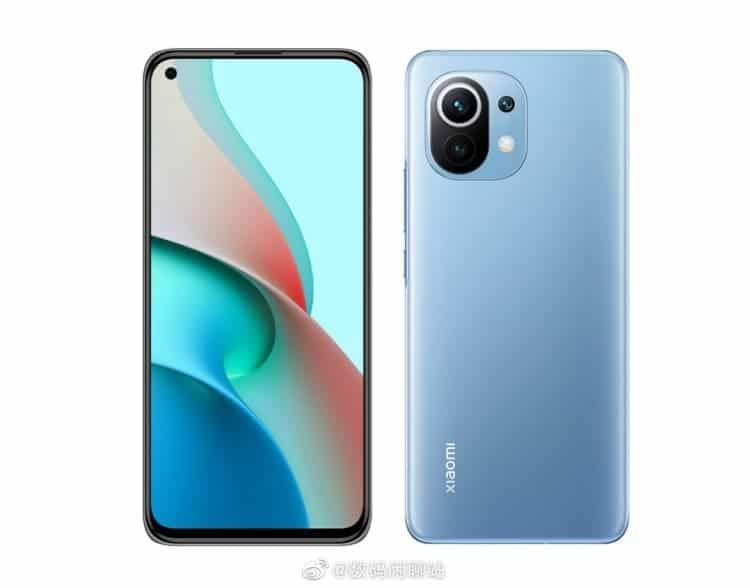 Today, a new render emerged surfaced from Weibo revealing the design of the Xiaomi Mi 11 Lite. According to the renders, the overall design will resemble that of the Xiaomi Mi 11. The back is almost a complete replica of the flagship’s design scheme. In the upper left, we find a big square-ish cutout for the triple-camera module. It is also equipped with the family-style “angel eyes” circle design.

In the bottom part of the display, we can find Xiaomi’s horizontal logo. Moving around to the front, we have a punch-hole display with a top-left cutout housing the selfie snapper. The biggest difference between the Mi 11 Lite display and the flagship model is that we have a flat panel in this particular variant.

According to BIS certification, the Xiaomi Mi 11 Lite will come with 6GB of RAM and will be available in two storage configurations with 64GB and 128GB. The phone will draw its powers from a 4,150mAh battery. This battery is below what other Mi devices are offering lately, but this seems to be the choice to make the Mi 11 Lite a “minimalistic” phone with a very thin and light profile. The battery will charge fast thanks to 33W fast-charging which is on par with other mid-range phones in the Mi family.

Furthermore, the phone will have an LCD with a 120Hz refresh rate. The render does not suggest a side-mounted fingerprint scanner, but we believe that this will be the case here. Under the hood, the phone will carry the Qualcomm Snapdragon 732G chipset. It will also have a 64MP main camera, 8MP super wide-angle unit, and a 5MP macro/depth shooter.

The choice for a Snapdragon 732G means that this phone will be a 4G LTE one, and due to the overall specs we assume that it will be much cheaper than last year’s Mi 10 Lite. We will not be surprised to see a 5G variant coming as well. Previous leaks have suggested a variant with the Snapdragon 775G. For now, there are conflicting reports, so we need to wait for further and consistent info to appear.