A couple of months ago, a special render surfaced a month ago suggesting a special leather Realme Race variant. Nowadays, we know that the Realme Race will, in fact, reach the market as Realme GT 5G. Today, it was revealed that the leather-like variant will come as Realme GT 5G Bumblebee edition. The new info was revealed by Realme Vice-President Mr. Xu Qi Chase. He shared a poster on his Weibo account, giving us a good glimpse of the upcoming device. If you’re familiar with the Transformers franchise, you’ll recognize the Bumblebee colors here.

The image does not much apart from confirming the presence of a 64MP primary camera. The device will have a Triple-Camera setup on the back comprised in a rectangular camera island. Although Realme didn’t reveal the other cameras’ purpose, the rumors suggest that it is a 13MP ultrawide and 13MP telephoto unit. 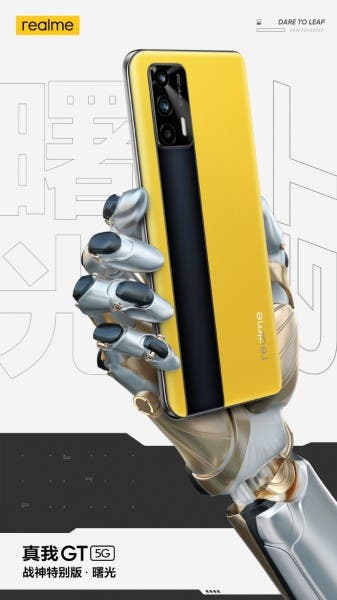 Worth noting that the Bumblebee color name is just for reference. For now, there is no confirmation suggesting that this will be the official name. According to GSMArena’s report, the VP post suggests that this yellow variant will be called “GT Ares Special Edition-Dawn”. That surely is a mouthful name. However, an earlier report suggests that the new color will carry the Racing Yellow moniker. 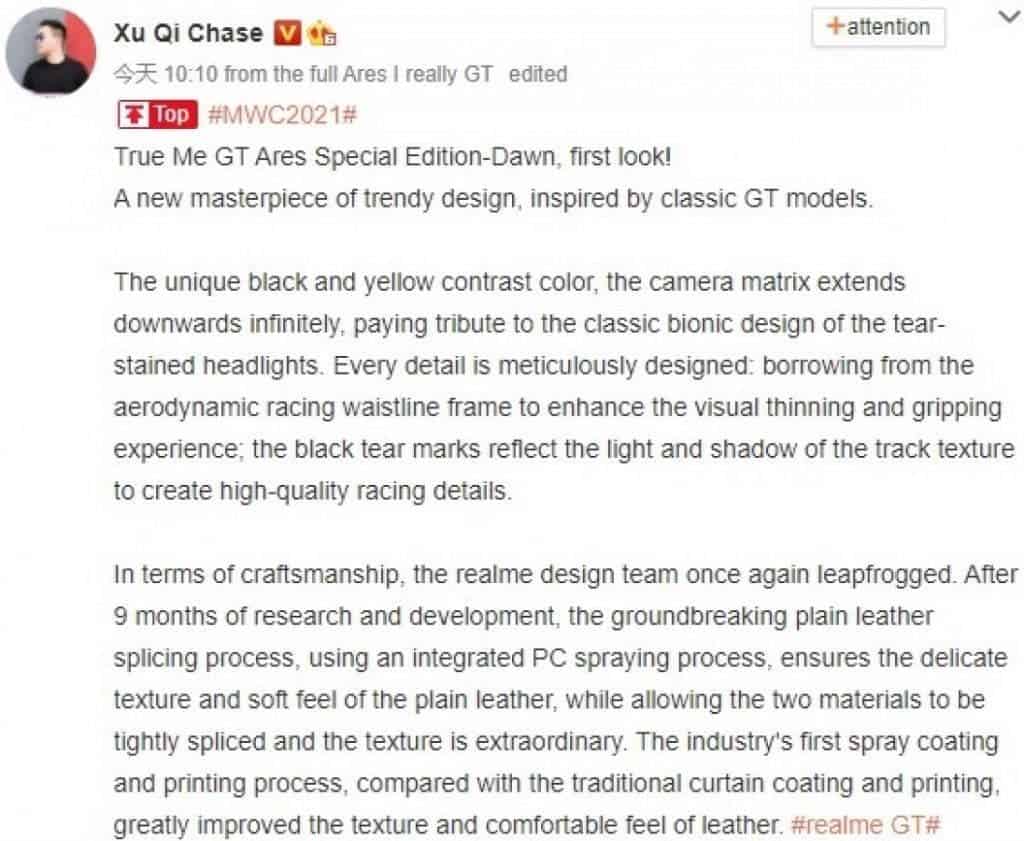 The Realme GT 5G and all its variants will go official on March 4 in China. For now, the handset will remain exclusive to the Chinese market, but hopefully, Realme will not take much longer to bring it to western markets. Besides the leather variant, the handset will arrive in a glass-based variant. So far, we can only confirm a silver colorway, but Realme tends to bring more than a single color.

The Realme GT 5G will be the company’s flagship for Q1 2021. Under the hood, it will pack a Snapdragon 888 SoC paired with up to 12GB of LPDDR5X RAM and 256GB of UFS 3.1 storage. We expect other memory configurations, but so far, we only have the 12GB/256GB variant confirmed. The handset will run Android 11-based Realme UI 2.0 straight out of the box. There is a 4,880mAh battery giving power to the handset. It charges via 65W fast-charging.

The new flagship will be the first coming of Realme’s 2021 “Dual-Platform Dual-Flagship” strategy. The brand revealed at MWC 2021 in Shanghai that it will be bringing a flagship for performance with Qualcomm chipset, in this case, the Realme GT 5G. In the coming months, the brand will unveil a flagship featuring MediaTek’s Dimensity chip with a focus in the camera department.