Apple faced some challenges last year due to the COVID-19 pandemic. The brand had to postpone its iPhone 12 series to October and lost the usual sales of Q3 2020. However, the devices ended the year as true hits. In addition, the iPhone SE 2020 release in the middle of the year helped the brand to conquer a solid userbase in some regions. International Data Corporation (IDC) released its report on the Japan Mobile Phone and Smartphone Market respectively for Q4 2020 as well as the year 2020 as a whole. Without any doubt, the company was one of the most popular brands. In Japan, the company amassed the biggest slice of the market alongside Samsung and four domestic brands. 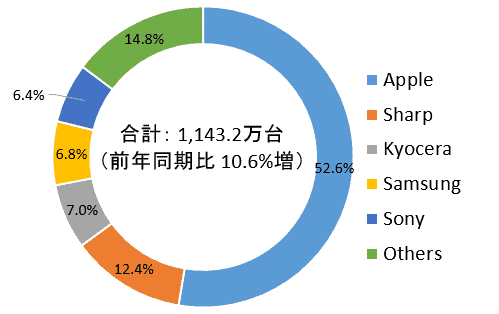 As per the report, the Japan Mobile Phone market reached 11.432 million shipments in the fourth quarter of 2020 with a 10.6% Year on Year growth. This was mostly due to the release of the 5G-capable iPhone 12 series. Apple’s shipments incremented by 13.8% YoY with 6.015 million units. The company had a whopping 52.6% market share.

The mother of the iPhone was followed by Sharp with 1.414 million and a 12.4% market share in the second place. In third place, Kyocera with a 7.0% market share and 801K units in shipments. Samsung was the fourth company with a 6.8% slice of the market by shipping 781,000 million units. Lastly, we have Sony, a very traditional Japanese brand that isn’t the most appealing in its own country. Sony was the fifth largest mobile phone brand during the last quarter with 732,000 units in shipments and a 6.4% market share. Talking about smartphones, the brand’s shipments bring a total of 11.301 million units in the last quarter of 2020. As far as ranking is concerned, the only difference is that Kyocera came fourth, while Samsung captured third place. 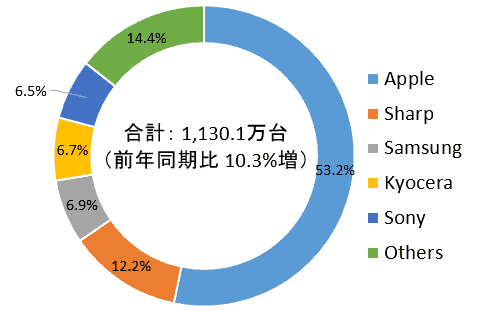 The report also mentions some of the popular product lineups by these top 5 brands. Sharp AQUOS Sense 3 series, Fujitsu Raku-Raku Smartphone series, 5G-enabled Samsung Galaxy S and A series. Last but not least, Kyocera BASIO Series for elders. Interestingly, except for Sony, none of these Japanese brands have a big presence in the overseas market. Sharp tried some years ago, but nowadays is focusing on the domestic market.

Next iPhone 13 will use Qualcomm Snapdragon X60 5G baseband modem