Samsung’s best-selling smartphone in 2020 was the Galaxy A51, and for that reason, the brand wants to make a sequel that will continue the success of this handset. The Galaxy A52 will come in 4G and 5G variants and both of them have been leaking extensively during the past few months. It’s hard to pass a week without news about these devices as well as the Galaxy A72 series. Today, we have another leak revealing one of the Galaxy A52 5G characteristics. It will come with water-resistance. A new leaked render was posted by Evan Blass (via) confirming IP67 certification. So far, only the actual launch date for the Galaxy A72 4G and 5G remains a mystery.

Interestingly, the Galaxy A52 5G will be the first Samsung mid-ranger since 2017 with any sort of official protection against water. Over the past few years, the brand added a bunch of smartphones to its Galaxy A and M family. However, none of these devices was certified for any sort of IP rating. Apparently, the brand really wants to build appeal for its Galaxy A52 lineup. The reason is that the brand wants the new devices to sell like hotcakes, just like their predecessors. 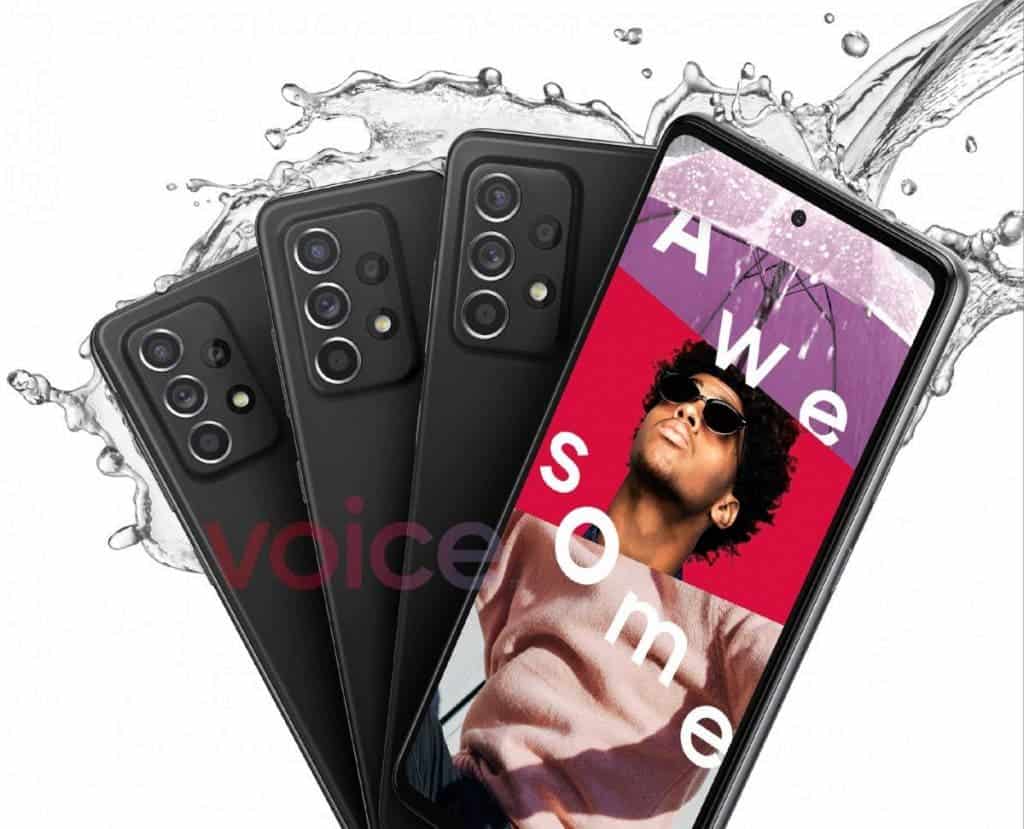 The new teaser also confirms a Quad-Camera setup on the back. This hardly is a secret now. After all, the device has been leaking a lot lately. It will pack a flat AMOLED display with an in-display fingerprint scanner. Under the hood, the 5G variant is set to come with a Snapdragon 750G, 4500mAh battery and will support up to 25W fast-charging. However, Samsung will not be so kind and will include a mere 15W charging adapter in the retail package. For more details you can dive into the full specifications for both 4G and 5G variants of the Galaxy A52.

The Galaxy A52 4G and 5G passed by the Geekbench benchmark with the Snapdragon 720G and Snapdragon 750G, respectively. Each one of them will have two memory options depending on the market – 6GB of RAM with 128GB of Storage, or/and 8GB of RAM with 256GB of Storage. Both variants have a microSD card slot for further memory expansion. It’s a nice feature that is absent in the recently released Galaxy S21 smartphones.

Both handsets are identical in design. This means that both handsets will pack a 6.5-inch FullHD+ Super AMOLED display with a fingerprint scanner underneath and a punch hole in the center. The cutout serves as a house for the 32MP selfie camera. Worth noting that the 4G variant is set to come with a 90Hz display, whereas the 5G variant will go all the way up to 120Hz.

The rear panels of the Galaxy A52 4G and 5G will come in four distinct colorways. The device will pack a Quad-Camera setup comprising a 64MP primary, 8MP ultrawide, and 2MP depth sensor. Both handsets will draw power from 4,500mAh batteries. Although they come with 25W fast-charging, this does not mean that the bundled charging brick will come with these capabilities. According to 3C, and FCC listings, the 5G model will ship with a 15W adapter. The handsets come with a 3.5mm headphone jack, Bluetooth 5.x, NFC, Dual-SIM support, and IP67.