Ten years ago, AMD was suffering behind Intel and NVIDIA in both CPU and GPU segments. However, with the advent of Ryzen CPUs and new Radeon GPUs, the situation is charging. Now, the company is set to start its 2021 season with the arrival of AMD Radeon RX6000 series GPUs. The new GPU will be unveiled on March 3 at the “Where Gaming Begins: Episode 3” event. The first episode brought Ryzen 5000 CPUs, Ep.2 was the RX 6800 launch. Now, we have big expectations for Episode 3.

On March 3rd, the journey continues for #RDNA2. Join us at 11AM US Eastern as we reveal the latest addition to the @AMD Radeon RX 6000 graphics family. https://t.co/5CFvT9D2SR pic.twitter.com/tUpUwRfpgk

AMD posted an image of the GPU in question. It has two fans instead of three like the higher-end cards. However, it appears to be quite huge. This suggests that we are looking at the Radeon RX 6700 GPU. Of course, the company probably will unveil vanilla and an XT card again. Based on the Navi 22 chips. The new AMD Radeon RX6000 GPUs will be positioned against NVIDIA’s mid-range offerings.

The GeForce RTX 3060 will go official later today, however, due to the issues with the supply chain, getting one of these will be quite complicated right now. It also is the case of the RTX 3060 Ti that is sold out in most places. We were expecting the situation to improve in the first quarter, but apparently, we still have a shortage of GPUs until the end of the first semester.

We are curious to see how many units of its GPUs AMD will have shortly after the launch.

RX 6800 XT – AN OUTSTANDING TECHNOLOGY FOR THE ULTIMATE GAMING EXPERIENCE

Back in the last year, AMD unveiled the Radeon RX 6800 XT to push the family with a $649 price tag. It brings 72 compute units and 16GB of GDDR6 memory on a 256-bit wide memory bus. The graphic card can clock up to 2015MHz under load and can occasionally hit peaks of 2,250MHz for short durations under ideal conditions. AMD states that this card consumes a total board power of 300W.

The RX 6800 XT also brings 128MB of Infinity Cache. This technology trademarked by AMD basically is a high-density, high-speed cache based on the Zen L3 cache. The new cache is made to minimize DRAM bottlenecks, reduce latency, and power consumption. It will also help to optimize the 4K and 1440p resolutions. In combination with VRAM, AMD states that the Infinity Cache offers 2.17x bandwidth of a 384-bit wide GDDR6 memory.

The king of last year’s Radeon series was the Radeon RX 6900 XT what we can call a graphics card for enthusiasts. It brings 80 compute units, but the remaining specifications are similar to the 6800 XT. The big deal here is that it costs $999 and offers nearly the same performance as the $1,499 NVIDIA RTX 3090. According to the chart provided by AMD, it even surpasses its competitor. 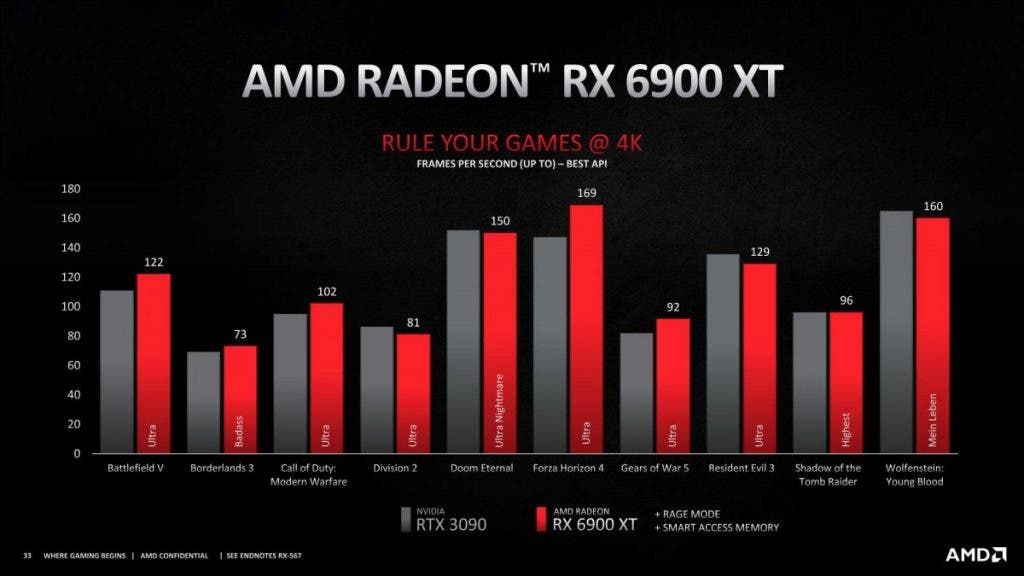 The new RX 6000 series GPU will likely fill the gap left in the mid-range market, while the other two GPUs should remain the company’s sole bets in the flagship market.