The market of tablets struggled in the past few years. While Apple was the most relevant company in this segment with its iPad series, Android OEMs always lagged. We can say that Apple manages to deliver a better software solution for iPad than Google does with Android. Despite this, several companies like Samsung, Lenovo, and Huawei keep investing in this segment. Apparently, this is finally paying off as the tablet market is trending again. According to the International Data Corporation (IDC) which posted its analysis on India’s tablet sales for 2020, the last years brought an impressive 14.7% growth, totaling 2.8 million units.

According to IDC Research, the recent demand for tablets is primarily coming from the under $200 price segment. Around 1.4 million shipments have tablets in this pricing point. Lenovo is the leader in 2020 ahead of Samsung and Apple, however, it lost a huge chunk of its lead. The Chinese company saw a 15% decline in overall sales. Samsung, on the other hand, grew 157%. The iPad Market share remained similar to 2019, which just a small decline in the number of total units shipped.

The vendor iBall was the third company in 2019. However, due to issues with the supplies, people turned away from the homegrown Indian brand. This was terrible for the company that to deal with an astonishing 70% decline in sales. Huawei, despite its challenging situation, managed to triple its sales. However, the numbers were away from being impressive. For that reason, the brand sits in fifth place. 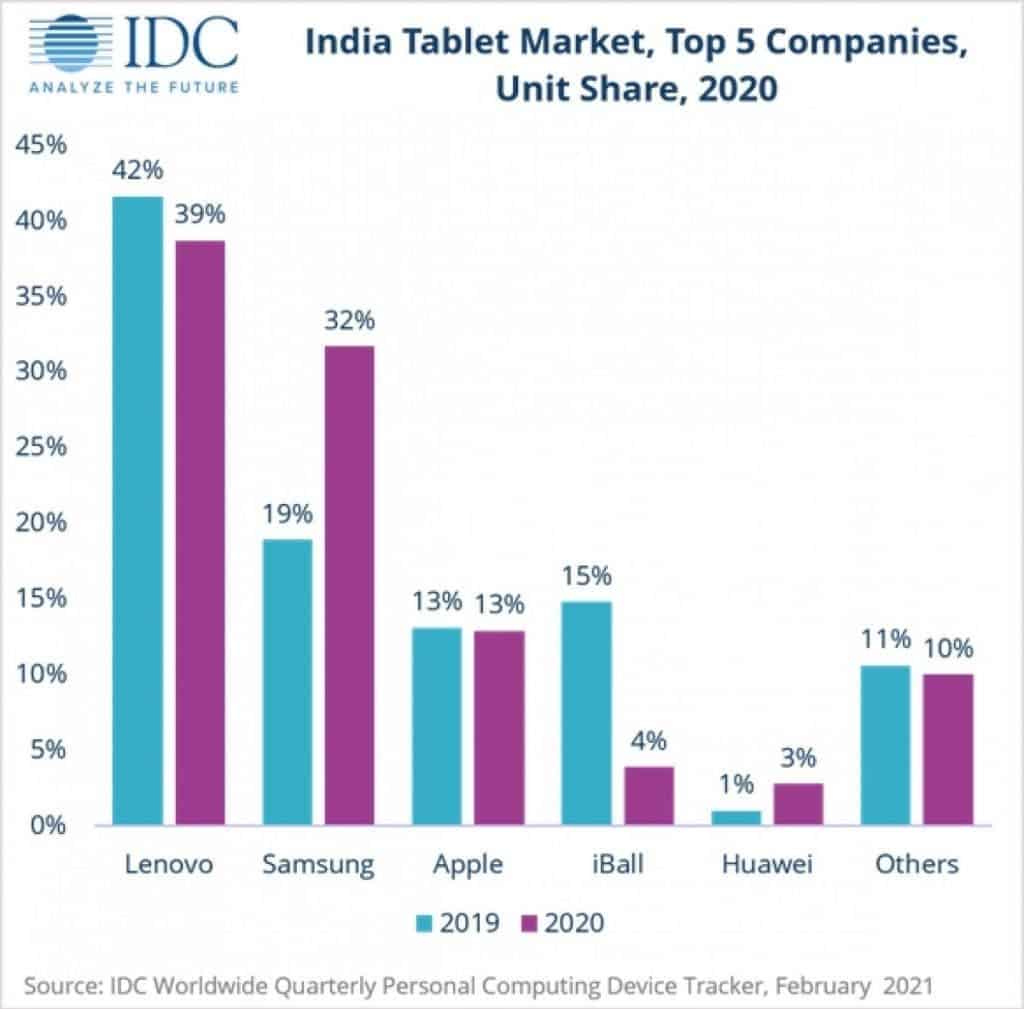 According to IDC, the recent demand has to do with the ongoing pandemic. Since people are recommended to stay at home and avoid public meetings, most of the students had to switch to remote learning, the so-called e-learning. Hence, several users had to look for good ways to study at home and the affordable value of certain tablets was exactly what they needed. Apart from the growth in the market of affordable tablets, IDC also states that the $300+ segment was quite positive. The research states that this particular range saw impressive growth of 72.3%. The big demand here goes for the Galaxy T|ab S6 Lite and the iPad 10.2.

We believe that the market for tablets will keep growing in the coming months. In light of this growth, certain companies such as Xiaomi may finally make a return to this segment with the rumored tablet Mi Pad 5. The company is India’s largest smartphone brand, and we believe that it probably is interested in a slice of this market.