Oppo unleashed its Oppo Reno5 series in December through a vanilla and a Pro variant. However, the company later added a Pro Plus variant and a 4G version for certain markets. Now, the company seems to be preparing a set of variants that will take the whole Alphabet. After reports about a Reno5 K, Reno5 F, the company is moving on to release an Oppo Reno5 Z. This latter variant recently acquired Bluetooth certification, and now is passing by USA’s FCC.

The phone was spotted at the FCC certification with the CPH2211 model number. That’s exactly the same model number that appeared on Bluetooth SIG a couple of days ago. The FCC certification confirms that the phone will come with Android 11-based ColorOS 11.1 straight out of the box. Moreover, it will pack a 4,310mAh battery which charges up to 30W with the bundled charger. As we can notice, the phone will be placed below the standard Oppo Reno 5 phones since they come with 65W fast-charging.

Although the phone is expected to hit a lower pricing point, it will still come with 5G network support. Once again, Oppo seems to be assuring its commitment to the 5G expansion. 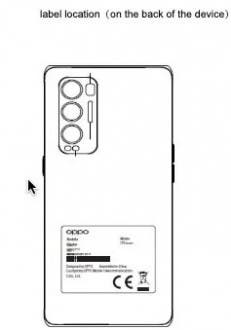 The listing also reveals a schematic with three cameras on the rear panel. Moreover, the power button is located on the right-side frame and the volume rocker on the left. We know that is hard to judge by a simple sketch, but the button seems to be a standard one. So, it may indicate an in-display fingerprint scanner which also suggests an AMOLED display.

FCC also reveals the new smartphone will be 7.8mm thin and weigh 175 grams with the battery inside. Unfortunately, it didn’t detail the remaining specifications. Since the device already bags multiple certifications, we believe that its launch is imminent. In fact, March will be one of the most interesting months for Oppo enthusiasts. Apart from the multiple Oppo Reno5 variants, the brand is also expected to update its Oppo F-series and its flagship Oppo Find X3 series.

Talking about the Oppo Reno5 series, the brand seems to be also preparing the Oppo Reno5 K for release this month. This handset will pack the Snapdragon 750G, AMOLED display, 64MP Quad-Camera, and 4,300mAh battery with 65W fast-charging.