Xiaomi started its Mi 11 series in December 2020 with the Mi 11. The company went ahead of its usual schedule to launch the first smartphone with a Qualcomm Snapdragon 888 SoC. Now, we’re waiting for the other variants to fill up this family such as the Mi 11 Pro, Mi 11 Ultra, and, Mi 11 Lite. The latter certainly will not be the most powerful Mi 11 smartphone but will offer a taste of the smartphone series at a lower price tag. The device has been leaking in a couple of renders lately, but so far the specifications have been a mystery. Certain rumors suggest a Snapdragon 732G, while others are expecting an unannounced Snapdragon 775G. Now, the Google Play Console listing comes to shed some light on these rumors.

The Mi 11 Lite will be equipped with the Snapdragon 765G

The alleged Xiaomi Mi 11 Lite passed by Google Play Console listing with the “Renoir” codename and M2101K9G model number. The chipset’s model number coincides with the Snapdragon 765G and so do the core configuration and clock speed. So, in the end, it turns out that Xiaomi will be used the Snapdragon 765G for another year. This makes sense for a 5G premium mid-range phone. After all, Qualcomm didn’t announce a replacement for the SD765G, so far we only have rumors about the SD775G. Also, we’re hearing about a crisis in the semiconductor market that is also affecting smartphone chips. So, the company will likely stick with the chips that they already have in stock. The listing confirms an 8GB RAM variant, but that may not be the only one available.

Join GizChina on Telegram
Read Also:  Xiaomi 11i and 11i HyperCharge get Android 12-based MIUI 13 update 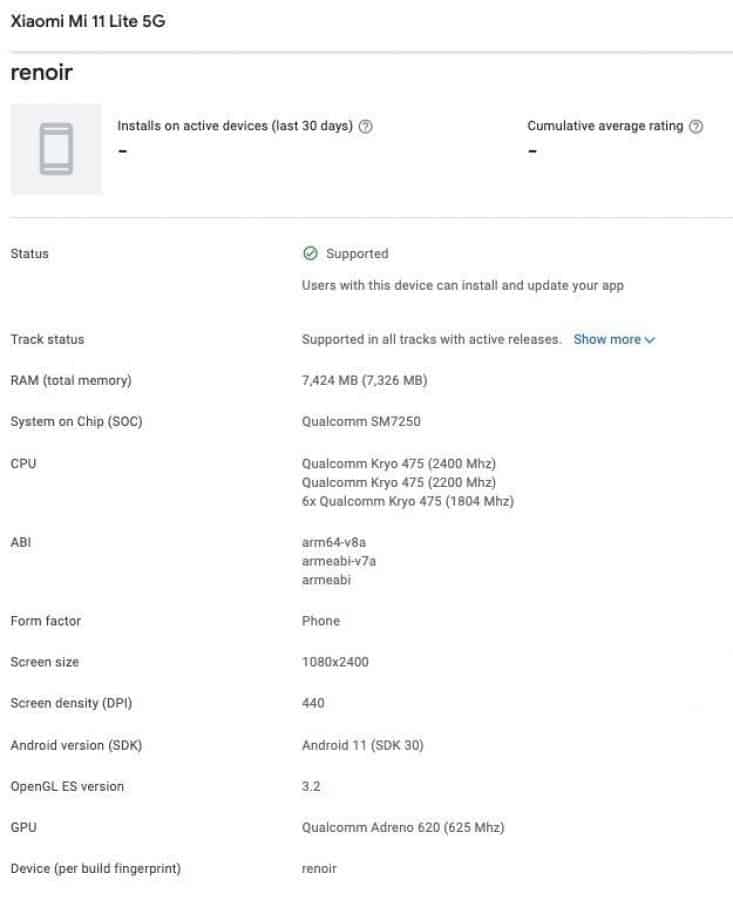 The listing further reveals a 2,400 x 1,080 resolution which is hardly a surprise right now. Moreover, the device will run Android 11 straight out of the box and we can expect, at least, MIUI 12 to be running on top. Of course, MIUI 12.5 is more preferable in a smartphone coming under the Mi 11 series. Unfortunately, the Google Play Console does not reveal other details about the handset. However, judging by previous leaks we can expect a 4,150mAh battery with 33W fast-charging. The device may also come in other storage variants with 64GB and 128GB. The base model should come with 6GB of RAM.