An Indian Twitter blogger, Abhishek Yadav, discovered a new Xiaomi model with a 50MP main camera. According to him, this new device appeared in the MIUI camera program. While there is no information on this phone, there are reports that this could be the Xiaomi Mi 11 Ultra. The tweet reads 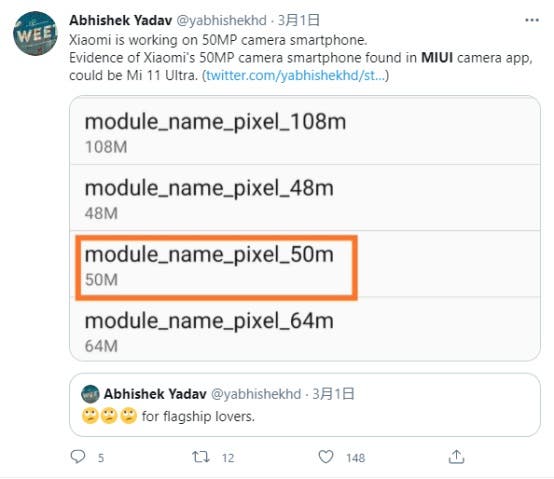 Unfortunately, the MIUI camera program does not reveal any other details regarding this smartphone.

Back in December last year, Xiaomi introduced the Mi 11 as its first flagship smartphone for the 2021 season. The company opted for a December launch to be the first company using Snapdragon 888 platform. We believe that the Mi 11 family will grow bigger in the next few months. The company will launch the Mi 11 Pro, a Mi 11 Lite / Youth Edition, and even the Mi 11 Ultra. The latter will bring high-end specifications that will make it stand as the king of the family. According to leakster Ice Universe, the new flagship will be the first implementing Samsung 50MP ISOCELL GN2 sensor.

The new camera sensor was recently unveiled by Samsung and brings great upgrades over the first generation. For instance, it is capable of 1080p video recording with 480 frames per second, and 4K video recording with 120 frames per second. The new 50MP ISOCELL GN2 sensor also is the first to implement Samsung’s Dual Pixel Pro technology. It’s a natural evolution for PDAF technology.

In addition, the Xiaomi Mi 11 Ultra will sport a large-size 6.8-inch quad-curved OLED display with a resolution of WQHD+, an adaptive refresh rate of 120Hz. The rest of the screen parameters include a 515PPI pixel density, 480Hz touch sampling rate, and DCI- P3 color gamut.

There is also a 20-megapixel camera in the upper left corner. The whole screen will use the Corning Gorilla Glass.

In other aspects, the machine is expected to support 120W wired fast charging, 67W wireless fast charging, and 10W reverse wireless charging. Of course, it will have an IP68 certificate. The battery capacity will reach 5000mAh. The speakers will come our way from Harman Kardon. And the phone will sport the latest flagship mobile platform of Qualcomm, the Snapdragon 888. The latter will be paired with an LDPPR5 and UFS3.1 storage. The highest version will have 16GB of RAM.

Prior to this, @Max Weinbach informed that the top version of the series has a model name M2102K1G and its code name is ‘star’. The code name of the original Mi 11 is ‘venus’

Previous Samsung Galaxy A72 has appeared in the Google Play Console

Next TikTok owner is working on its own version of Clubhouse