Realme is the fastest-growing smartphone brand for a good reason – the company does not wait much time to update its portfolio of smartphones. It’s hard to see a month without any Realme smartphone. This month, was quite important one for the Realme fans in China. After all, the brand introduced the Realme GT 5G as its first 2021 flagship. However, the company is also set to bring new budget smartphones such as the possible Realme C25.

Just a couple of days ago, the brand unveiled the Realme C21 in Malaysia. Now, it seems to be preparing the terrain for a new C-series smartphone. The handset has just bagged certification from the National Broadcasting Telecommunications Commission (NBTC) authority of Thailand. Besides, the phone passed by the GeekBench Benchmark listing which reveals some of the key specifications.

The Realme C25 has an RMX3191 model number according to the NBTC database. Interestingly, the very same model got approval from Europe’s EEC, Indonesia TKDN, and Indonesia Telecom. None of the certification listings have revealed information on the specifications of the Realme C25. 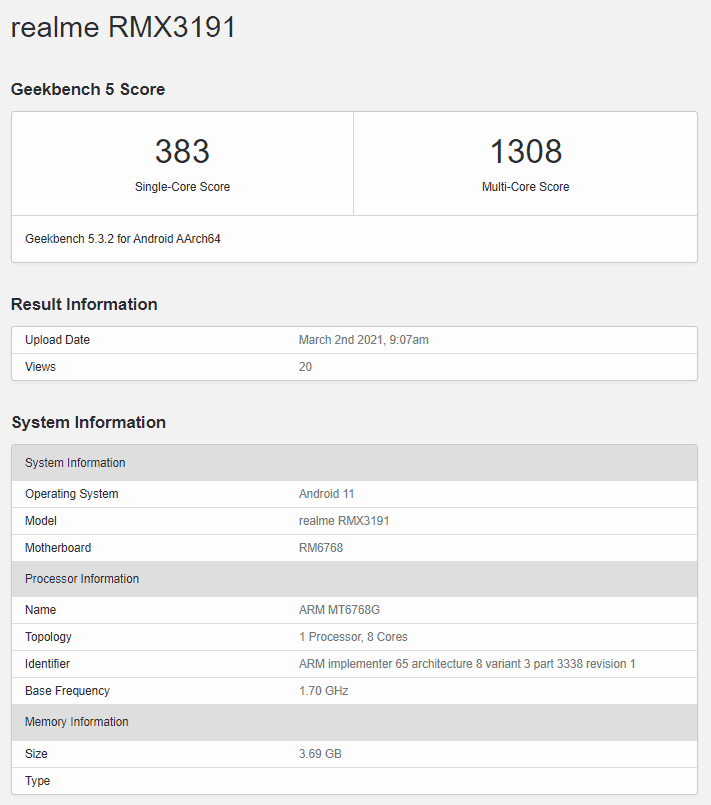 According to the GeekBench listing, the Realme C25 is fueled by the MediaTek Helio P65 SoC. This chipset carries the MT6768G model number. It offers a base frequency of 1.70GHz. This chipset is paired with 4GB of RAM and it runs Android 11 straight out of the box which also confirms Realme UI 2.0 on this device. In the single-core tests, the phone amassed 383 points which aren’t very impressive. It also reached 1,309 points in the multi-core department. The other details of the Realme C25 are under wraps right now. We don’t know exactly when this phone will reach the market, but it may come between this month and April. We can also expect a huge battery with at least 5,000mAh to complete the package. The phone may come with a triple-camera setup and an LCD just like other Realme C-series smartphones.

In related news, worth noting that Realme is gearing up to launch its Realme 8 series this month. The Realme 8 and Realme 8 Pro may hit India and global markets in the end of this month to compete with the new Redmi Note 10 series. The Realme 8 Pro passed by FCC regulatory body with RMX3081 model number and will be the first Realme smartphone with a 108MP main camera.

March certainly will be an exciting month for Realme fans across the world.