A couple of years ago, ZTE was struggling with the US ban after violating certain sanctions against Iran. The company practically ceased its operations after being included in the US entity list. After a couple of months, Trump offered the company a chance to return its activities after agreeing with certain changes in its leadership. The company returned to the market with innovative devices and the big return was carved by the arrival of the ZTE Axon 20. The handset was the industry’s first smartphone with an in-display selfie camera. As per reports, ZTE is gearing up to reveal its new flagship dubbed ZTE Axon 30 Pro which is set to come with the second generation of ZTE’s in-display selfie. A new report indicates that the handset will come with an impressive camera setup.

The brand has been teasing its next flagship since the beginning of the year. So far, these teasers have been indicating that the phone will launch with a triple-camera setup. According to a new post from Weibo, the Axon 30 Pro will feature three 64MP cameras. This will be a first in the industry since companies tend to use just a primary 64MP unit coupled with less capable cameras. 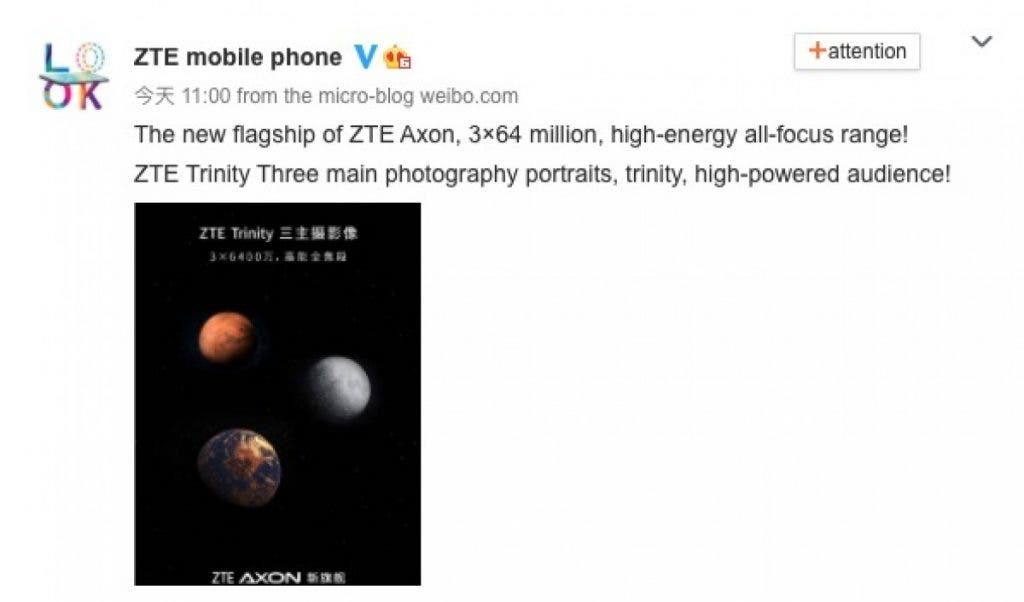 This impressive camera setup isn’t coming just to make numbers. Apparently, ZTE is touting all focus range which implies at least one telephoto camera and perhaps an ultrawide snapper. Having a 64MP ultrawide unit, and a 64MP telephoto camera certainly will ensure outstanding camera capabilities. We’re not sure how the company’s 2nd gen in-display camera will perform. After all, this novice tech has a lot of shortcomings at the moment. One thing we know, the main camera setup will certainly impress at least on paper. Everything will also depend on how well ZTE will optimize its software to extract the maximum of these cameras. Talking about the in-display snapper, we know that the phone will boast a 44MP sensor this time around.

We’re still curious about the ZTE Axon 30 Pro specifications. The ZTE Axon 20 impressed us with its in-display selfie camera, but the handset had mid-range specifications. For the Axon 30 Pro, we’re expecting the phone to be a full flagship, hopefully with a Snapdragon 888 chipset to make it a strong competitor.

According to the 3C listing, the ZTE Axon 30 Pro will come with an A2022 model number and 55W fast-charging.

Next Who Did Hurry To Bury Galaxy Note Series? New Models Are Coming ... In 2022