The US ban applied on ZTE two years ago is thing of the past. After reaching an agreement with the country’s administration in 2018, the company resumed its operations and quickly started to push a wave of competitive smartphones. Recently, the company surprised the world with the first commercially available smartphone packing an in-display selfie camera. The company is about to unleash the second generation of its in-display camera technology in the form of the ZTE Axon 30 Pro. However, it also has plans for the “conventional” smartphone market. Earlier this month, the brand revealed that a new ZTE S series smartphone is coming soon. Today, we learned that the phone carrying the ZTE S30 Pro moniker will go official on March 30. The new handset will pack impressive specs like a 64MP main camera, 44MP selfie snapper, and a 144Hz refresh rate.

During the March 30 event, the company will bring more than its new ZTE S30 Pro handset. According to the press release, the brand will launch its 1+2+N ecosystem. Apparently, Chinese brands are really excited in naming these strategies. It follows Huawei’s 1+8+N strategy and the 1+4+N strategy from Realme. Just like other companies, every number/letter stands for a particular niche of devices. However, in ZTE’s case, the strategy has another meaning. Apparently, it has 1 user, 2 major devices (smartphone and/or tablet), and an unlimited N amount of smart ZTE appliances that can work in the same environment through a unified user interface. 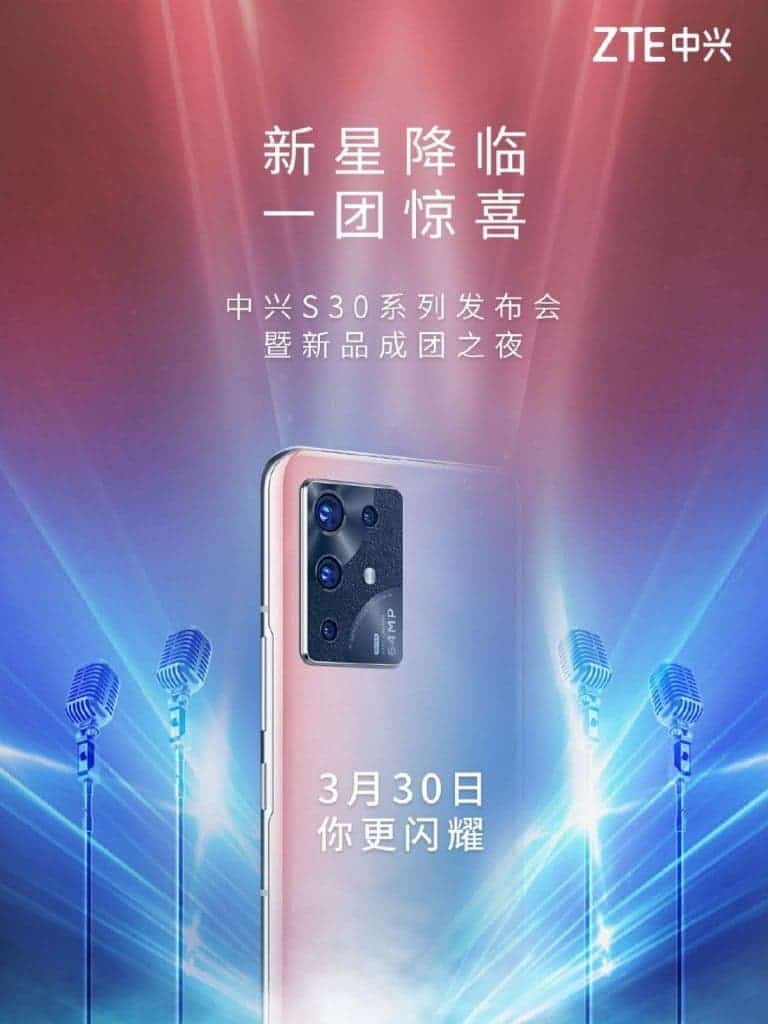 Coming back, the new ZTE S30 Pro and the S series represent a replacement for the iconic Blade series. The device has a stunning gradient finish and a Quad-camera setup sitting on a square-ish camera island. Unfortunately, only the main sensor is confirmed. However, the other two sensors probably are an ultra-wide-snapper, macro sensor, and depth sensor. The device is a mid-range phone so we believe that it will pack a standard punch-hole camera. ZTE will likely keep the in-display sensors exclusive for its flagship Axon family.

Unfortunately, most of the handset specifications are still a mystery right now. We still have 12 days until the launch, so we expect the company to start its usual wave of teasers before the launch. It probably will be a 5G smartphone and will have China as an initial target market. However, ZTE may bring it to European markets at a later date.