Realme has started the year with style thanks to the release of its Snapdragon 888-powered, Realme GT flagship in China. At the end of the month, the company will unveil a new variant with MediaTek Dimensity 1200 chip dubbed Realme GT Neo. Now, a new report suggests that at the very same March 31 event, the company will bring the Realme V13. The Realme V-series, so far, has remained as a Chinese exclusive lineup of smartphones. The devices are usually mid-tier or budget phones with 5G connectivity.

The Realme V13 is coming two months after the Realme V15 (Realme clearly isn’t interested in following numbers’ sequence here). The new Realme V13 design quite resembles the Realme V15 with some elements coming from the Realme V11 5G. On the front, the phone brings back Realme’s favorite punch-hole alignment. In the rear, we have a Quad-Camera arrangement with a setup that resembles the V11 and also the recently released Realme 8 series. 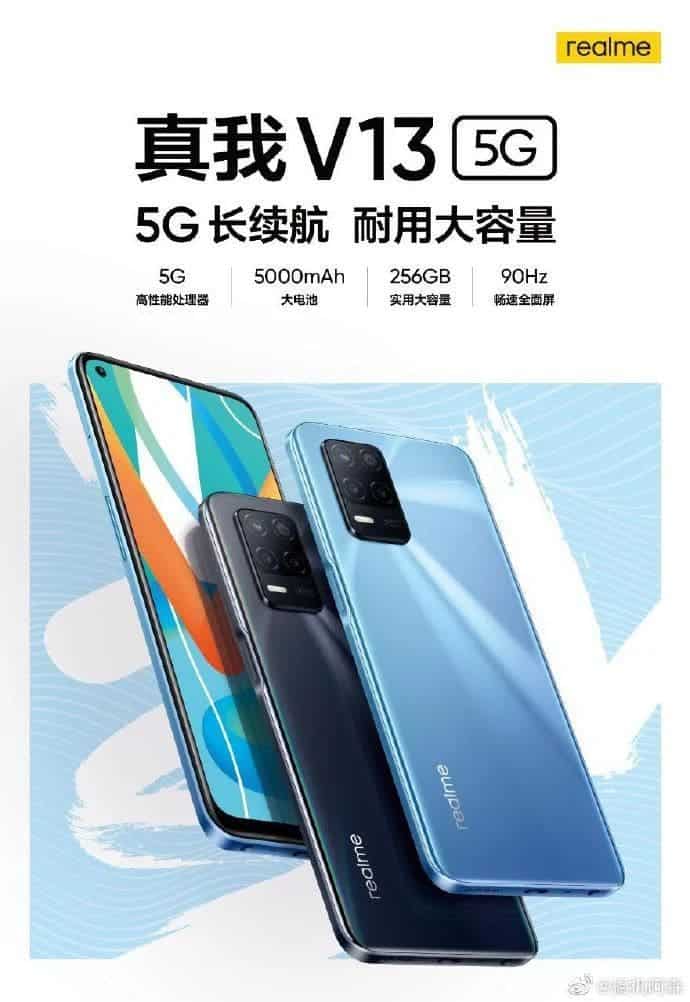 Today a Weibo user called “Arsenal” revealed the Realme V13 in all its glory. The handset has a top-left aligned punch-hole and the display is said to have a 90Hz of refresh rate. We’re almost sure that this is an HD+ display due to the budget nature of this lineup. The phone also has a side-mounted fingerprint scanner. Other details include a 5G chipset – the MediaTek Dimensity 700 chipset. The phone will also have a 5,000mAh battery and a whopping 256GB of storage in the most advanced version. It also has a 3.5mm headphone jack flanked by n USB-C port and speaker grille. The device will come in blue and black colorways.

According to the source, the phone shares similar specifications to the Realme V5 and Realme Q2. However, this phone has MediaTek Dimensity 700 chipset powering it. He also adds that the phone will pack 8GB of RAM and will have a price tag of CNY 1, 799 (~$275). It will go on sale on March 31 and will also be sold across Chinese offline retailers.

We’re not sure if the Realme V13 will have a quiet launch or will share space at the Realme GT Neo’s unveiling. The latter has a MediaTek Dimensity 1200 chipset with up to 8GB of RAM And 256GB of Internal Storage. The handset will also come with a capable 64MP Sony IMX682 camera and will have 65W fast-charging.

Next Huawei to unveil HarmonyOS on April 24, Huawei P50 series on April 27