We wait eagerly for new product launches from our favorite companies, but honestly, we already know most of their releases ahead of the events. The industry nowadays is moved by leaks and this isn’t changing anytime soon. Nothing wrong with that, but there are still very rare occasions when a company manages to surprise us. That’s exactly what happened today at Xiaomi’s March 30 event. The second day of Xiaomi’s mega launch of products was quite hectic due to the release of the Mi Mix Fold. The company also announced new strategies and a major change in its visual identity. What we weren’t expecting was a duo of new laptops. Xiaomi unveiled today it’s Xiaomi Mi Laptop Pro 15-inch and 14-inch.

The new laptops are quite exciting due to their specifications. The Mi Laptop Pro 15 clearly is the big start of the show with a larger E4 OLED display. This panel is of the very same type used in Xiaomi’s flagship handsets. It is very bright when you consider standard laptops with a 600 nits peak brightness. It also has DC dimming. To honor this model, we have a high 3.5K resolution that makes the display pretty sharp with an amazing 261 ppi pixel density. The overall resolution delivers as a 16:10 aspect ratio which is on par with modern laptops. The 10-bit panel offers 100% coverage of the DCI-P3 color gamut. It is calibrated before it ships. Another interesting fact about the display is that it packs Gorilla Glass coating. This is common on smartphones, but not on laptops. 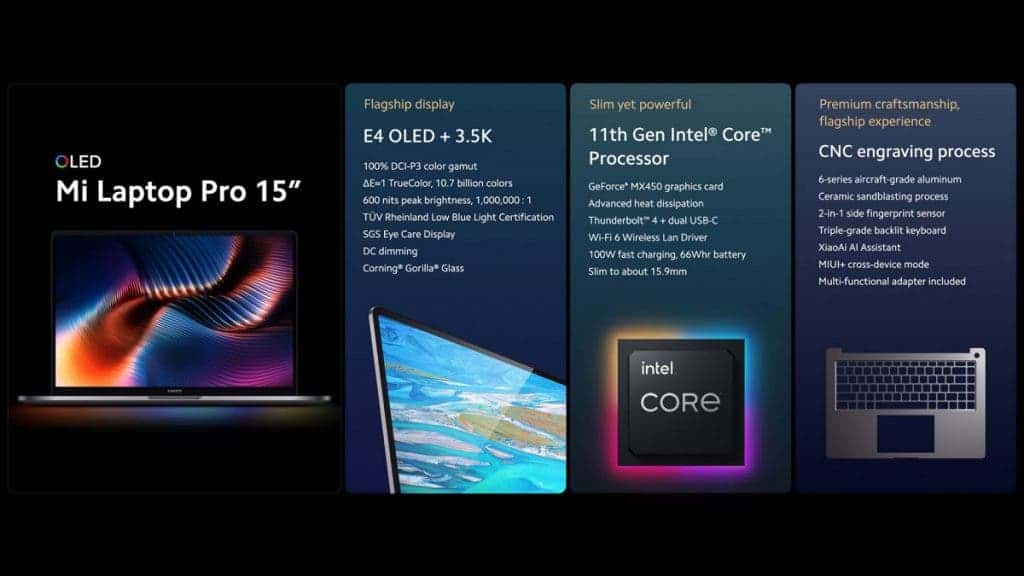 The Mi Laptop Pro 15 boasts 11th generation Intel Core processors. There is a standard model with i5 and a high-tier version with an i7 processor. In both cases, there’s a GeForce MX450 GPU with 2GB VRAM. The laptop has two fans and boasts Intel Evo Platform certification. It draws power from a 66 WHr battery with 100W fast-charging. On the connectivity front, there is a Thunderbolt 4 port plus two UBS-C ports. Xiaomi includes a free port expander dongle in the retail package. It adds a full-size HDMI and a USB-A port. Despite its capacities, the laptop is quite slim and has just 15.9mm thickness. The chassis boasts 6-series aircraft-grade aluminum. The device can be pre-ordered starting today, the actual sales will being on April 2.

The price starts at CNY 6,500 ($990) for the i5 powered variant with 16GB of RAM and 512GB SSD. The i7 variant with the very same memory configurations costs (~$1217). For those who don’t enjoy Intel and would kill for an AMD-powered version of this laptop, we have good news. Xiaomi is preparing an AMD Ryzen 5000H (45W) variant of the laptop that is coming in May.

Xiaomi also has the Mi Laptop Pro 14. Due to its smaller display, it’s slimmer and lighter with 15.6mm thickness and 1.5 weight, respectively. Its chassis also has the  6-series aluminum. The device shifts the OLED panel in favor of a common LCD with a 120Hz refresh rate. It also brings 2.5K resolution and a 16:10 aspect ratio. Color accuracy is still good, but there is no HDR support here. 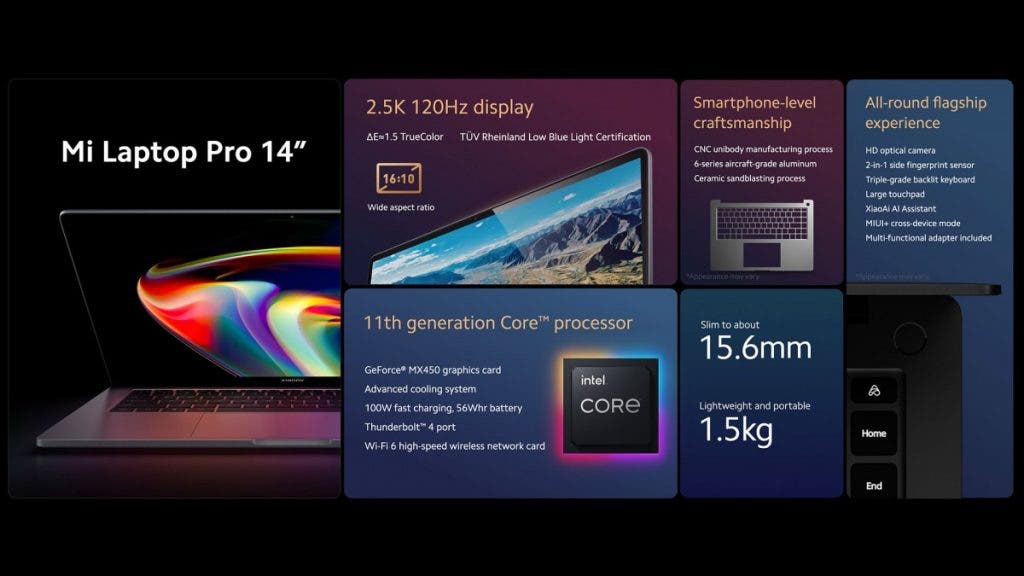 This model is available in Core i5 or i7 11th gen configurations. It also has the same GeForce MX450 GPU. Its 56 WHr battery charges at 100W. There is only one port, Thunderbolt 4, so users will need a port expander.