ARM is here once again to change the world of smartphones, and also computers. After all, the first ARM-based computers are already proving that this can be a trend in the future. Today, a new architecture has been announced to dictate a new standard for the future of processors featuring ARM cores – ARMv9 will be at the heart of the next 300 billion ARM chips. If you recall, the current ARMv8 architecture was revealed in 2011, ten years ago. It moved from 32-bit to 64-bit. Over the last five years, there have been more than 100 billion ARMv8 handsets. What the new ARMv9 have in tow for us? Let’s dive in the big novelties introduced by the new architecture.

If you want to keep important data safe, Realms is a secure execution environment for any app that needs it. In fact, not even the operating system will be able to penetrate this layer of security. It will keep user data and app code safe, even on outdated Operating systems with security vulnerabilities.

Furthermore, Fujitsu worked alongside ARM to create a Scalable Vector Extension (SVE). Fujitsu is the first to benefit from this since it’s using it on its Fugaku supercomputer. ARMv9 brings SVE2, which will be spread across the CPU, GPU, and Neural Processing Units. Matrix multiplication, in particular, will see a major boost. It is a key operation in machine learning. SVE2 will be able to handle vectors ranging from 128 bits to 2,048 bits.

We may see the first AMRv9 CPUs pretty soon. After all, the first two generations are already being designed. By the second generation, performance will grow by 30% over the current Cortex designs. The second generation, Makalu, will be the first Cortex-A core to drop support for 32-bit software. Companies are already doing the necessary preparations for it. Google Play Store, for example, isn’t accepting 32-bit only apps for a couple of years now. However, from August 1, 2021, the Store will stop serving 32-bit only apps on 64-bit devices.

Upcoming Mali GPUs will have Ray-Tracing and more 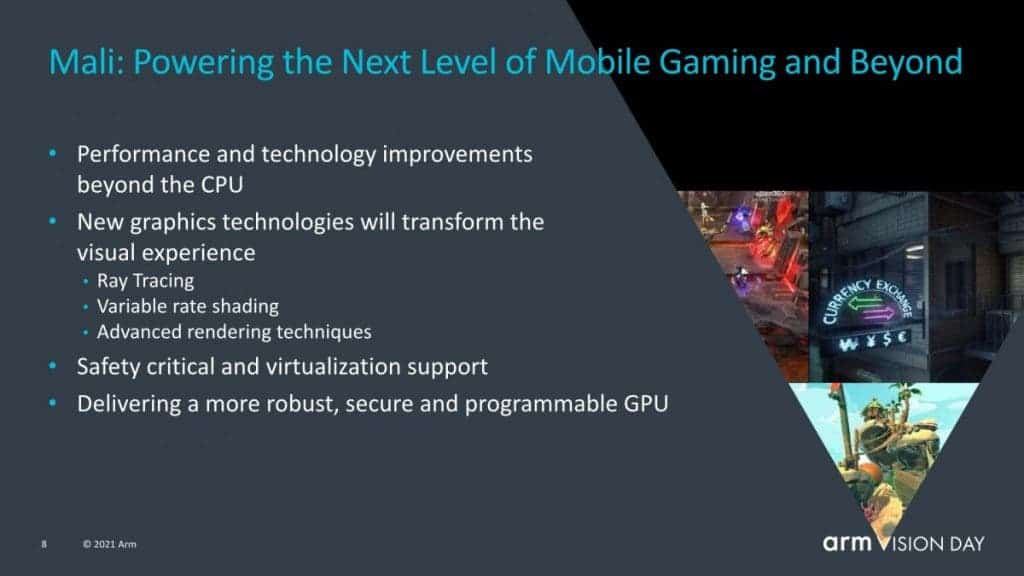 ARM also revealed some of its plans for its future Mali GPUs. According to the statement, the company is already working on Ray Tracing, variable-rate shading, and other advanced rendering techniques. Are the first mobile GPUs with Ray Tracing coming soon? Hopefully.

We expect the whole industry to move to the new standard, but we’re not sure if the first chipsets featuring ARMv9 cores will appear this year.

Next Galaxy Watch 4: Samsung might end up ditching TizenOS altogether for WearOS

The acquisition of ARM by NVIDIA has been abandoned