The last year was very problematic for several companies in the technology segment. While we had a very complicated beginning for smartphone makers, some devices under the wearable and smart audio segment experienced exponential growths. With many devices coming under several pricing categories, the users are finally entering the segment of smartwatches and true wireless earphones, for example. According to Canalys, the global market grew throughout 2020, with Apple being the leaked in both wearable and smart audio fields.

There is a new demand for smartwatches with health-centric features 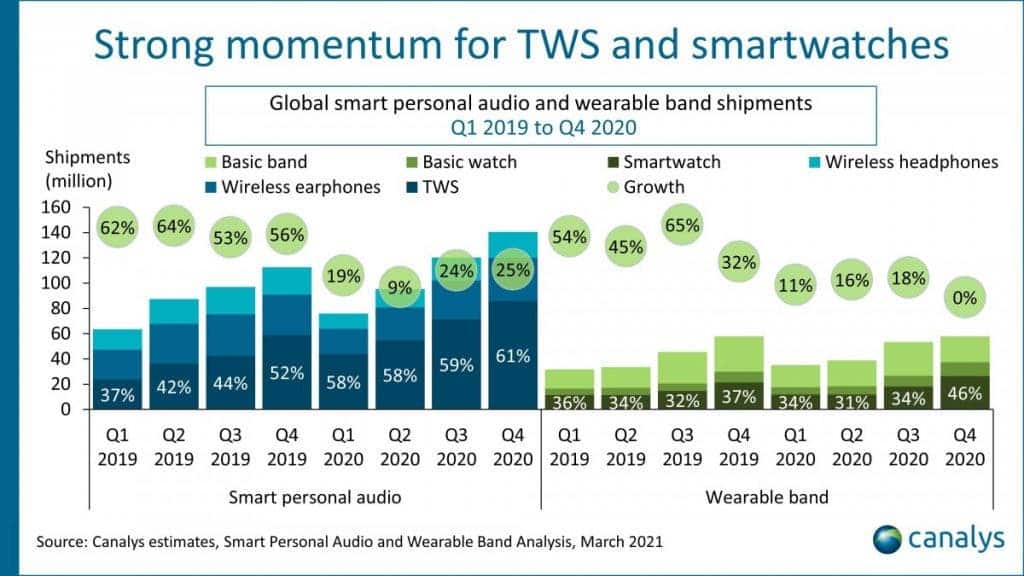 The growth was pushed by strong consumer demand and health-conscious users. Talking about health-conscious users, the whole crisis moved by the pandemic forces people to stay aware of their health and body conditions. The advent of smartwatches with SpO2 sensors allowing reading one’s blood oxygen levels also accounted significantly in this math. According to the research agency, the market does not has many barriers. This allowed manufacturers to flood the market with “vast shipments”, also assisted by some companies’ mature supply chains.

Well-established vendors like Skullcandy, Fitbit, and Sony, and smartphone makers like Apple, Samsung, and Xiaomi, reported an increase in sold units. The audio devices grew 20% to 432 million units, while wearables rose 10% to 185 million devices. One of the moments in last year when the market didn’t experience expressive results was the last quarter of 2020. Xiaomi failed to answer the demand, but Apple managed to double its sales YoY. Companies now are seeing a great demand for more devices that allows them to build solid IoT ecosystems. The challenge before big makers is to have a long-term strategy surrounding health and fitness analytics.

The growth will remain strong in 2020

Canalys expects the growth to remain strong this year. However, the supply chain will suffer this year due to the crisis in the market of components. For that reason, personal audio devices will grow only 15.6% reaching 500 million. Wearable bands will have a solid 10% climb, reaching 204 million units.

The competition will also be tough in the coming months as more and more companies are joining this segment. Last year, we saw Realme entering this segment, while other established companies decided to increase their offer of wearable devices. Companies are trying to differ with more health-centric features, or in the case of audio-devices more features to enhance the quality.

Apple will probably keep the lead in the smartwatch segment thanks to its well-established Apple Watch series. Furthermore, the company is one providing the most complete operating systems for a smartwatch. In the health-centric regard, the company was the first to introduce an ECG reading, and probably will also be one of the first coming with a blood glucose reading feature.

Previous Huawei HarmonyOS Beta 3.0 is out - see all the new upgrades