The Nokia G20 and G10 are quite similar in specifications, however, the G20 takes a clear advantage when we talk about cameras. The higher model comes with a 48MP camera module. It comes alongside a 5MP ultra-wide-angle camera, 2MP macro, and 2MP depth units. The main sensor is clearly the winner here as the other three sensors will not make wonders with low-resolution. The handset has an 8MP selfie snapper sitting inside of a waterdrop notch. The handset has The Nokia G10 has a modest 13MP main camera, two additional 2MP modules, and the very same 8MP selfie snapper.

Under the hood, the Nokia G20 packs the modest Helio G35 Octa-Core chipset with eight Cortex-A53 cores clocked at 2.3GHz. The G10 comes with the slightly tweaked Helio G25 it has the same architecture but is clocked at a lower 2.0GHz frequency. The Nokia G20 comes with 4GB of RAM and up to 128GB of Storage. The G10 is available in 3/4GB of RAM with 32/64GB of storage, respectively. Both devices have dedicated microSD card slots and run vanilla Android 11. The software comes with the promise of 2 years of OS updates and 3 years of monthly security patches. 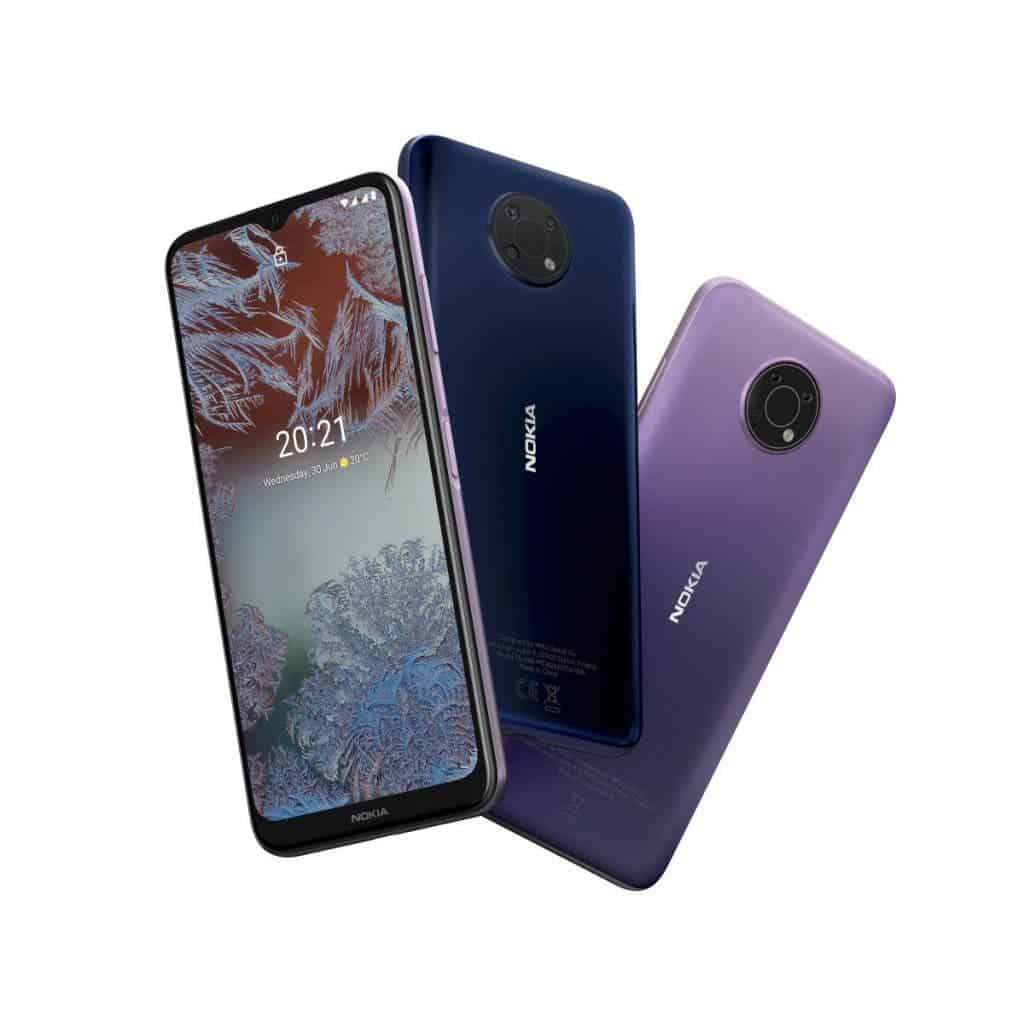 Both devices share the same design with a 6.5-inch LCD with HD+ resolution and waterdrop notch design. Moreover, they also share the same 5,050mAh batteries which is the largest capacity found on a Nokia smartphone so far. Unfortunately, they come with 10W chargers. At least we have a USB-C port on both smartphones. There is also a 3.5mm headphone jack and an FM radio receiver. The phone has LTE Cat.4, Wi-Fi 5, Bluetooth 5.0, and a side-mounted fingerprint scanner. Interestingly, both devices have a dedicated Google Assistant button and boast IPX2 rain resistance.

The Nokia C10 and C20 are far from being impressive devices. In fact, it has been a while since the last time a saw a smartphone with a 3,000mAh battery. But here is HMD with this exact capacity, other specs are acceptable and make justice to the super appealing price. These devices clearly are for non-demanding users that need more than a feature phone.

Both Nokia C10 and C20 have 6.52-inch LCDs with HD+ resolution. It’s great to see HD displays here since other cheap phones tend to break this barrier very often. It is protected by Panda Glass and targets 400 nits of brightness, with 70% NTSC coverage. Moreover, we have a single 5MP camera on the back for each device and a 5MP module on the front. The C20 can do HDR processing thanks to a slightly better chipset.

The devices come with Unisoc chipsets

Now, the core of the phones is quite uncommon. The Nokia C20 is powered by the Unisoc SC9863a, it’s an Octa-Core chip with eight Cortex-A55 cores clocked at 1.6GHz. The downside? It’s based on the super-old 28nm standard, meaning that battery life will take a hit. The C10 boasts the Unisoc SC7331e which is a 1.3GHz chip. The phones start with 1GB of RAm, but there are options with 2GB. In the same way, the storage starts at 16GB and goes up to 32GB. As a consolation prize, both devices get microSD card slots. The company promises two years of quarterly updates for this duo of low-end phones.

One of the worst points in these smartphones is the battery capacity. Both come with a small 3,000mAh battery with 5W charging over the micro USB series. At least the company keeps the 3.5mm headphone jack and FM radio. The C20 has Wi-Fi, 4G, and Bluetooth 4.2. The Nokia C10 loses some appeal as a 3G-only smartphone. With certain countries starting to ditch 3G networks, and the advent of 5G we don’t know if a 3G-only phone will have a bright future. Nokia C10 and C20  will cost 75 Euros and 90 Euros, respectively. The former will be available only in June while the latter will hit shelves later this month.