Counterpoint Research experts shared the statistics of the most popular smartphones in January 2021, which were mostly purchased by users. And this rating will delight iOS fans and will be a certain disappointment for those who prefer Android devices.

Let’s start with the fact that six positions out of ten are iPhone models. Moreover, four of them took first places in the top. The most popular and also the best-selling smartphone was the iPhone 12, the iPhone 12 Pro Max took the second place and the iPhone 12 Pro closed the top three of the leaders. Experts say that these three models accounted for 71% of all Apple smartphones sold during this period.

Here are the most popular smartphone models in the world 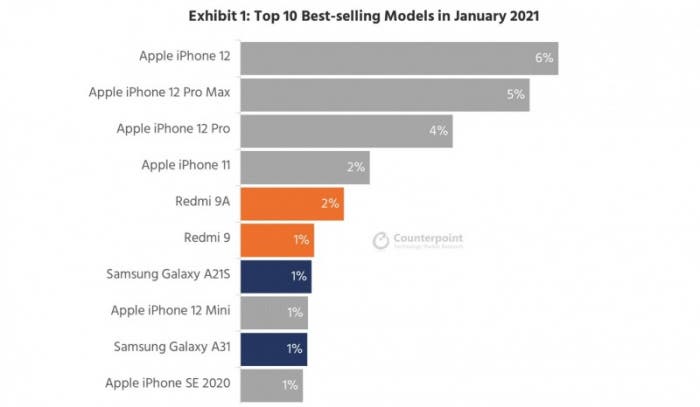 Noteworthy is the fact that despite all the skepticism and predictions of analysts of all stripes that the iPhone 12 mini is not in demand, it managed to break into the top ten most popular and took the honorable eighth place. Although it does sell worse than all the models in the iPhone 12 line, and by Apple’s standards, its production should be reduced.

The fourth position was taken by the iPhone 11 and then the hit parade was diluted by representatives of the green robot camp. The fifth line was taken by Redmi 9A and the sixth was Redmi 9. The seventh and ninth places were taken by devices from Samsung: Galaxy A21S and Galaxy A31. iPhone SE 2020 closed the top 10 most popular smartphones in January.

Samsung is aggressively promoting the Galaxy A series. It comes with a premium design, fresh colors and latest specs at affordable prices. Through the A series, Samsung is also looking to attract the users of HONOR devices; present in sizeable numbers in Europe, Latin America, South East Asia and MEA.

With the 5G network rollouts picking pace, OEMs are launching more 5G devices across various price segments. Even though 5G networks are not yet operational in many regions; OEMs are still launching 5G devices there with many customers preferring a 5G phone; to avoid any disruption in their replacement cycle later. 5G is slowly becoming a standard offering and as prices continue to come down; we will see more mid-tier 5G capable smartphones in the bestseller list in the coming months.

Previous Facebook turns its California headquarters into a vaccination site

Next OnePlus 9R To Sport Powerful Hardware Inside Slim Body