The bitcoin rate has once again hit its all-time high. The price of the first cryptocurrency increased by 3.4% per day, exceeding $63 thousand. This is evidenced by data from the Coindesk exchange.

Coinbase will be the first public crypto exchange in history. Before the IPO, the company published its financial statements for the first quarter of 2021. According to the documents, the site’s revenue for the quarter was $ 1.8 billion; and profits were about $ 800 million. At the same time, in 2020 the platform earned only $ 322 million.

Note that before, bitcoin had already crossed the $60 thousand mark in mid-March, but then dropped quite significantly – up to $51 thousand. At the time of this writing, as can be seen in the chart below; bitcoin also dropped slightly compared to its maximum reached a few hours ago. 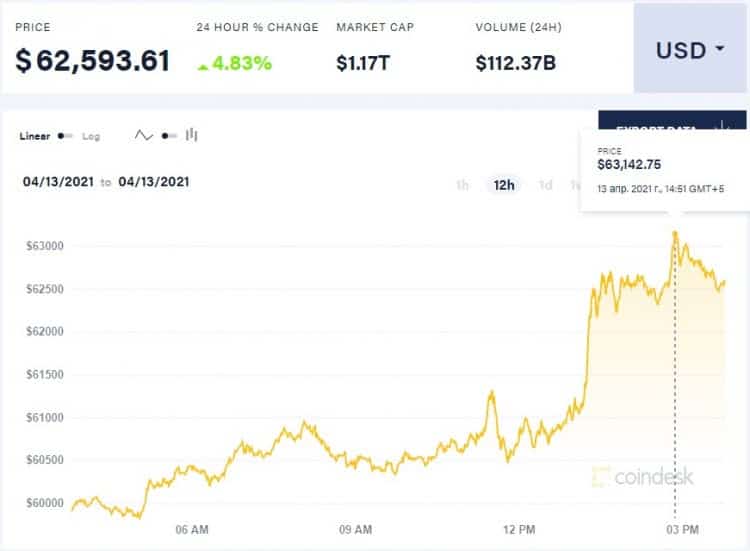 Apple likes to emphasize the increased level of privacy of users and their data, as well as the security of its services. Philip Christodoulou, a user of the App Store, who last month downloaded on his iPhone what seemed to be the official application for working with the Trezor hardware cryptocurrency wallet, was also sure of this. After completing the authorization procedure, he found that at the same moment almost all of his savings in the amount of 17.1 bitcoins, equal at that time to $600,000, instantly disappeared from the account.

The victim claims that he is angry not so much at the actions of the attackers who created the fake application; but rather at Apple itself, which betrayed his trust in it. And for good reason, because Apple openly calls the App Store “the most trusted app marketplace in the world”; where every published application is carefully scanned and verified. It is noted that the fake application had positive reviews; and at the time of removal, it was downloaded about 1000 times, which means it has other victims. It will not be superfluous to remind you that you should always be vigilant when working with financial assets; and carefully check the authenticity of the applications and links used – regardless of the working platform.

Previous Huawei blames the US for chip shortage problems