The second quarter of 2021 has started and we’ve been seeing many rumors about new smartphones set to come during this season. Among them, we expect Asus’s next batch of ZenFone flagship smartphones. The first rumors started to pop out about the ZenFone 8 series the last month. The rumors revealed that for this year the company is planning a ZenFone 8/Pro, a ZenFone 8 mini, and ZenFone 8 Flip. The ZenFone 8 / Pro may ditch the flipping camera mechanism, as a “Flip” variant probably is the only one bringing it back. As far as the ZenFone 8 mini is concerned, it seems to be the Taiwanese’s firm way to counter the iPhone 12 mini introduced by Apple. Although it isn’t being very successful for the Cupertino-based firm. 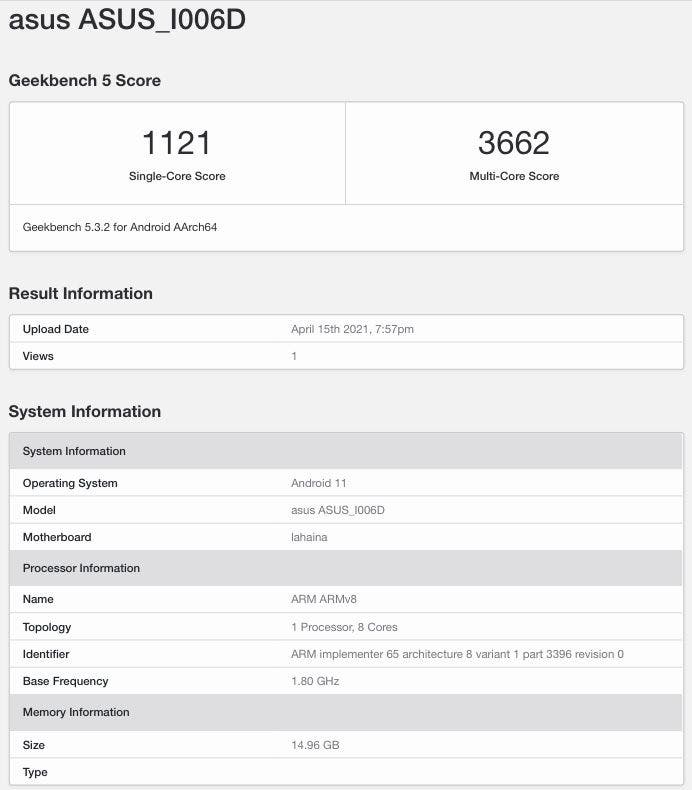 Today, a new development reveals the performance details of the upcoming ZenFone 8 mini. The new smartphone has passed by the GeekBench benchmark and its chipset has been put to stress. The listing reveals the performance unit details of the smartphone and also the amount of RAM that users can expect in at least one variant. As expected, the ZenFone 8 mini is coming with a Qualcomm Snapdragon 888. Despite its size, it’s a true flagship and it also has 16GB of RAM. The amount of RAM is impressive since 16GB of RAM is not a standard for mainstream flagships just yet. The chipset is paired with the Adreno 660 GPU meaning excellent performance on games.

The handset ran GeekBench with ASUS_I006D model number scoring 1,121 on the single-core tests and 3,662 in the multi-core department. The device runs Android 11 OS which is hardly a surprise for a 2021 flagship.

According to previous leaks, the new variant gets its name from its 5.92-inch OLED display. The display size may be big, but we assume that due to the tall aspect and small bezels, it will be really compact in the end. The screen may sport FHD+ resolution with 2,400 x 1,080 pixels, and a 120Hz refresh rate support. The phone may bring a dual-camera setup with a 64MP Sony IMX686 sensor and a new Sony IMX663 sensor. The phone is likely coming with a punch-hole cutout on its top to house a selfie snapper. As we’ve mentioned above, the flipping camera may not appear in any other variant besides the ZenFone 8 Flip.

For now, there isn’t much info regarding the new smartphone, but we expect more to appear pretty soon.

Next Lenovo to launch five notebooks & other devices on April 22