Transsion Holdings is a huge conglomerate in the Chinese market and is behind some smartphone brands such as Tecno, Itel, and Infinix. Since the last year, these brands are working hard to expand their presence in the global market. Until 2020, most of these brands have focused in the Asian and African markets, but this has changed with some neat smartphones coming from Tecno and Infinix. The former unveiled interesting devices such as the Camon 16, while the latter has a multitude of devices like the Infinix Zero 8 and the Inifix Hot 10 series which is trying its luck in India and other markets. Now, Infinix is gearing up to bring a new contender dubbed Infinix Note 10 Pro, the handset just had its specifications exposed alongside a couple of design renders.

The Infinix Note 10 Pro has been leaked extensively by the folks at XDA-Developers. The phone was also potted on Google Play Console by 91 Mobiles, which showcases the front design of the handset and a couple of specifications. The device’s display is pretty standard as many devices have a similar design nowadays that consists of a center-aligned punch-hole. The device will have minimal bezels on the bottom side. It resembles other smartphones such as the POCO X3 or the Moto G 5G that also adopt a similar design language for the display. One of the interesting details is on the device’s camera setup.

FCC’s certification schematics also confirm a Penta-Camera setup. Of course, we can’t set things in stone just yet since this is based on mere schematics. However, there are at least five holes in the rectangular camera array. We can also notice that the power buttons and the volume keys are on the right side of the smartphone. Furthermore, the power buttons look quite larger than a standard button. Apparently, the fingerprint scanner is embedded in the button. Consequently, we can expect an LCD to cut costs, hopefully with a high refresh rate. The phone also has a 3.5mm headphone jack and a USB Type-C port.

According to the Google Play Console, the phone will pack the Helio G90 SoC. This is a little underwhelming since this chipset can be found on the Infinix Zero 8 as well. It will be paired with 8GB of RAM and we expect at least 128GB of Storage. The phone will have a 6.9-inch display with a 90Hz refresh rate and 2,040 x 1,080 pixels of resolution. At least in terms of specifications, the device is looking too similar to the Infinix Zero 8. However, both devices have very distinct designs, so we can’t call this a rebranding. 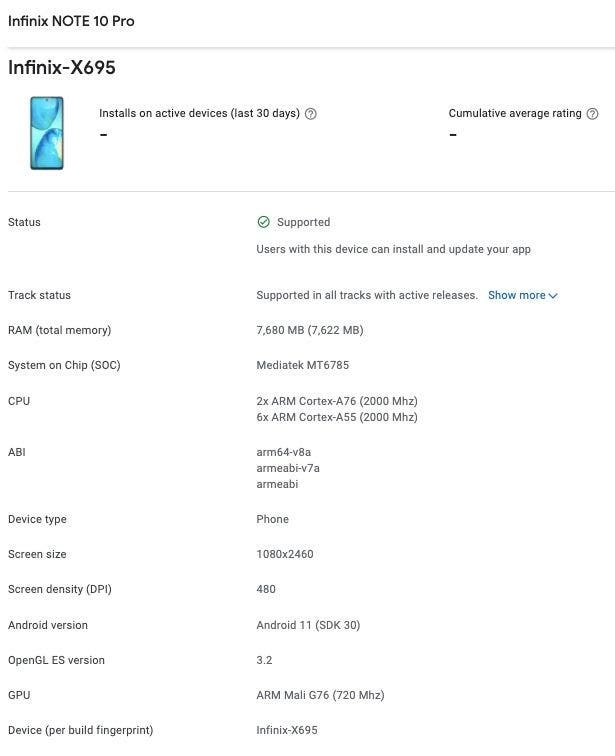 The device will have a main 64MP camera and a 16MP selfie snapper. It draws power from a 5,000mAh battery with 33W fast charging. We expect more details to appear in the coming weeks.