March was a busy month for Realme with so many important releases. The brand unveiled in the beginning of the month the first flagship of the year in the form of Realme GT featuring cutting-edge specs and a Snapdragon 888 at the helm. The company followed with the release of its Realme 8 and 8 Pro. Then, it closed the month with the launch of the Realme GT Neo which is a cost-effective flagship with aggressive pricing and MediaTek Dimensity 1200 chipset. Now, the company is gearing up to launch a new Realme 8 5G with MediaTek Dimensity 700 SoC. According to a fresh new leak, the company might be also preparing a new Realme smartphone with 5G SoC. A mysterious Realme RMX3161 has passed through GeekBench Benchmark with Snapdragon 750G and other compelling specs. It could be a new Realme 8 Pro 5G variant.

As usual GeekBench Benchmark is all about brute force and technical specs. The handset will come with the Qualcomm Snapdragon 750G. For those unaware, this chip is below the SD765G but surpasses anything on the 4G mid-range category of Qualcomm chipsets. This chip is present on the Redmi Note 9 Pro 5G (Mi 10i), Galaxy M42 5G, Galaxy A52 5G, and in a multitude of other devices. Now, Realme seems to be preparing its own contender with this chipset through the Realme RMX3161. We won’t be surprised to see it debuting as Realme 8 Pro 5G now that the brand is preparing to unveil a 5G variant of the vanilla smartphone. 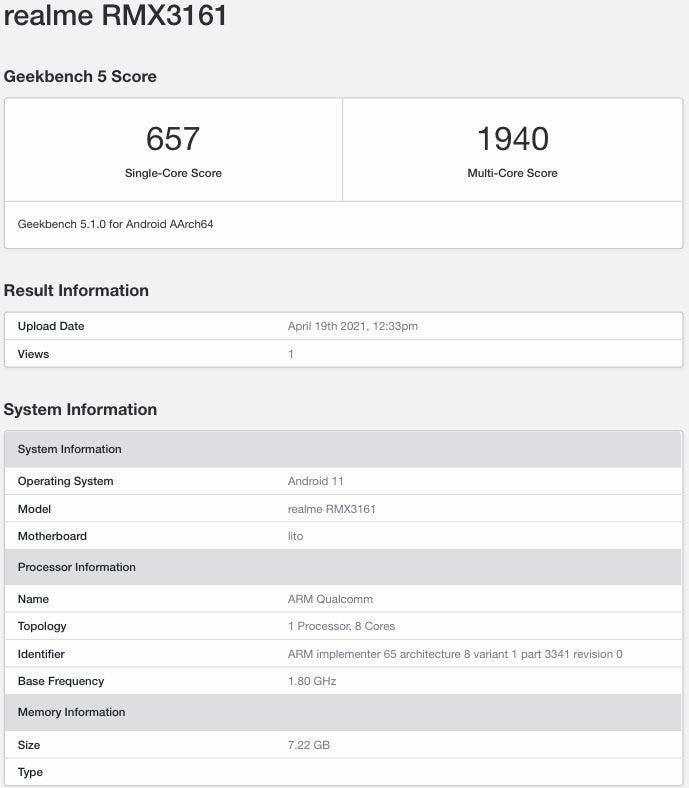 The Realme RMX3661 passed by GeekBench 5 scoring 657 on the single-core tests and 1,940 in the multi-core department. The device runs Android 11 straight out of the box, but this is hardly a surprise at this point. It also means that Realme UI 2.0 will be running on top. The device has 8GB of RAM which is a quite generous amount in the mid-range department and has an Adreno 619 GPU.

Why we think that this is a Realme 8 Pro 5G

When Realme unveiled its Realme 8 and Realme 8 Pro last month the devices were quite underwhelming. Don’t take me wrong, technically they are decent. The 8 Pro, for example, comes with an AMOLED display and a whopping 108MP camera. The problem is that the only upgrade here is the new large sensor.

The chipset is the same used on the past two generations, the Snapdragon 720G. Also, while the company has kept the AMOLED kind of display, it has been downgraded with a 60Hz refresh rate. Considering how many interesting devices came after the Realme 7 Pro, we can say that the Realme 8 Pro is quite a boring release.

The Realme 8 5G generated certain hype due to the Dimensity 700 chip and its probably aggressive pricing. We are sure that with the Snapdragon 750G, 8GB of RAM, and hopefully a 90Hz refresh rate, a Realme 8 Pro 5G could fix things. Of course, this is a mere assumption right now. We have to wait in see what Realme has in tow for this RMX3161.

Anyway, we don’t think that this new smartphone will appear in time for the Realme 8 5G release. The new variant will go official on April 22 which is just around the corner.

Previous Apple 'Spring Loaded' event on April 20: Here's how to watch online and what to expect!