For the past two years, Samsung has kept the foldable smartphone market under its belt. There are competitors from Huawei and Motorola, but the former is quite limited in availability, and the latter is underwhelming in specifications. The situation is changing now that more OEMs are joining this segment. Back in the last month, Xiaomi introduced its Mi Mix Fold as its first attempt in this niche. In the coming months, we expect Oppo and even Google to launch their foldable contenders. Since Apple is one of the most relevant companies in the smartphone segment, it’s natural to expect a foldable smartphone from them. However, a foldable iPhone may still take one year or two to reach the shelves. Meanwhile, the company is playing with concepts through patents.

Apple has been granted by the United States Patent and Trademark Office (USPTO) for an application of a new foldable smartphone design. According to a schematics report by Patently Apple, the latest concept shows a purported foldable iPhone that folds outward. This goes against the design of current foldable phones such as the Galaxy Z Fold 2 and Moto Razr 5G. Both devices have an inward folding design. Apple’s solution is closer to the Huawei Mate X foldable design, with some obvious differences. 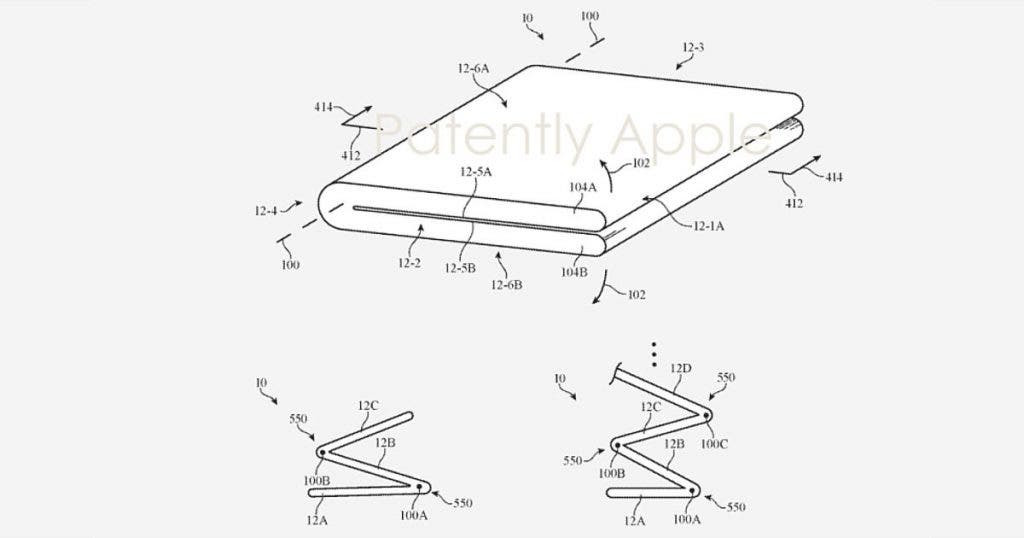 One of the advancements presented by this patent is Apple’s attempt to keep both upper and lower folded screens equal in length. As a result, it will not need a beveled part to break the flow of the design. The outward-folding design of the folding iPhone apparently aims to deploy even the hinge area as functional. According to this patent, the sidewall that’s formed by folding the device would include either glass or other transparent material that can qualify all parameters. The material has better parameters, viewing quality, touch accuracy, and durability.

Underneath the glass panels, Apple aims to use a touch sensor to deploy a variety of functions. These may include touch-sensitive volume control and interface navigation. The new device may even bring back the Touch ID with an in-display scanner. The patent also states that the sidewalls may be both flat or curved. One thing to note is that the patent states the sidewalls may be both flat or curved. Apparently, Apple will decide within time which one will be the most durable approach. One of the parts of the Foldable iPhone display appears to be all-screen, the other part, apparently, features an under-display conduction earpiece for calling.

The patent even features connectivity ports on one of the two folds. This gives further credibility to this patent’s potential to become a commercially available product. It may be too “advanced” in comparison with current foldable devices. However, Apple apparently is being very careful with its foldable iPhone. That explains why the company is taking too much time to launch a product under this class. It wants to ensure a viable and durable product.

Previous Galaxy Z Fold 3 to run on Snapdragon chipset and a smaller battery!