A lot of technological advancement is currently going on in China. Today, the “Future Internet Test Facility (FITI)” opening ceremony held at the Tsinghua University. FITI is a high-performance internet network facility. According to reports, FITI is currently the world’s largest Internet test facility and the first in China’s information field. It is a major national science and technology infrastructure project and an important part of future network test facilities. 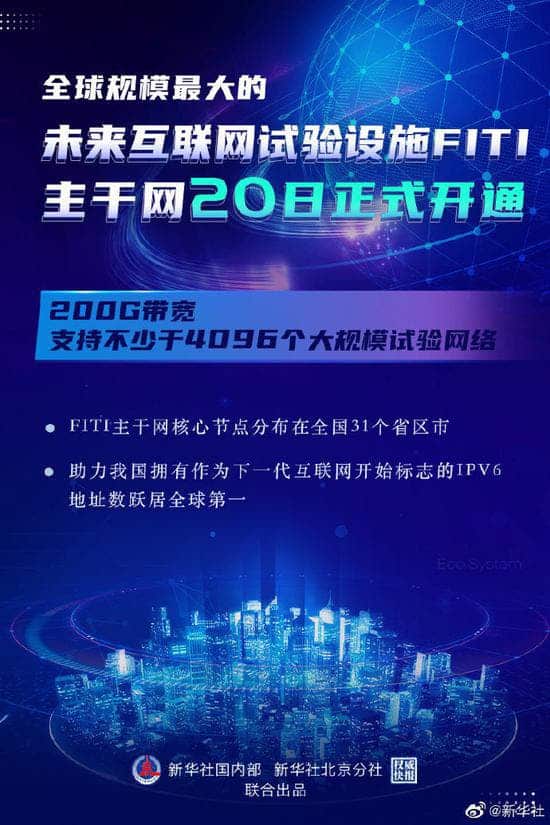 With the help of FITI, the number of IPv6 addresses that China has as a symbol of the beginning of the next-generation Internet jumps to the first place in the world. The core nodes of the FITI backbone network are distributed in 31 provinces, autonomous regions, and municipalities across the country. The bandwidth between the core nodes reaches 200G, and it supports no less than 4096 large-scale experimental networks.

China’s 5G network is far ahead of the competition

According to recent reports, China’s 5G network is progressing very well. Nevertheless, the country is still facing many difficulties in its 5G construction. In China, there are 718,000 5G base stations as of the end of last year. This accounts for 70% of the world’s total. According to estimations, China will have no less than 1 million 5G base stations this year.

However, the country will have to overcome the major challenges that hinder its 5G construction. The problem includes large capital investment, a long transition period, and industrial application.

Sun Songlin, a professor and doctoral tutor at Beijing University of Posts and Telecommunications, said

“China is currently building a large-scale 5G network, which is far ahead of the world, and there are many voices of doubt in the industry. In the 4G era, China’s mobile Internet applications are number one in the world. There are speculations that 4G will detonate the mobile Internet, but earlier deployments in the United States, Europe, Japan, and other countries and regions are not as prosperous as China. To be precise, it was the large-scale, wide-coverage 4G that detonated the mobile Internet. In addition, from the very beginning, 5G network will deploy on a large scale and with wide coverage. It is also the same logic. In the process of long-term integration with the industry, new business forms will be produced and industrial upgrading and digital transformation will be promoted”.

Many scholars, outside China, obviously will not agree with Sun Songlin’s view on 4G quality within and outside China.