Transsion Holdings is an important Chinese conglomerate that is behind smartphone brands Tecno, Itel, and Infinix. Devices from these brands were quite popular in certain markets across Asia and Africa. However, since the last year, they’ve been achieving popularity in the global market. Transsion is working hard to establish its name among the Chinese firms the succeeded outside of their domestic market. The Infinix brand launched the Hot 10 Play in India yesterday, and is gearing up to launch another smartphone with an Helio G90T SoC. Now, Tecno is launching a new smartphone with compelling specifications dubbed Tecno Spark 7P.

The Tecno Spark 7P is a decent smartphone featuring a huge 6.8-inch LCD with a 90Hz refresh rate. It’s good to see this refresh rate but the panel has an only HD+ resolution (1,640 x 720 pixels). It also comes with a Waterdrop Notch that serves as a home for the 8MP selfie snapper. Moving around to the back, it packs a Triple-Camera setup sitting inside of a rectangular island. This setup is described as a 16MP AI triple rear camera. We assume that the two remaining sensors have low resolution and for that reason, their numbers aren’t mentioned. Anyway, the setup comes with a feature called Smile Snapshot. It’s an AI Portrait feature that packs facial recognition intelligence allowing the users to capture that perfect smile. The camera features a Quad-LED flash which is quite unusual. 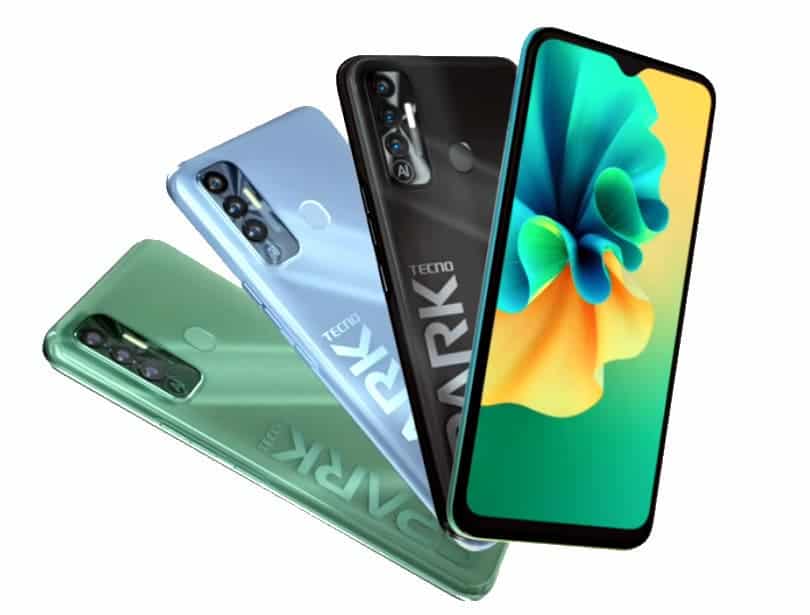 Under the hood, the phone packs an Helio G70 chipset. It’s below the G80 and G90 series chips but still is better than most of the chips in the Helio P-series. The Helio G70 comprises two ARM Cortex-A75 cores clocked at up to 2.0GHz and six Cortex-A55 cores clocked at 1.7GHz. The phone also has a modest Mali-G52 GPU that can handle some games in modest settings. The phone comes with 4GB of RAM and is available in two variants with either 64GB or 128GB of Internal Storage. You can easily expand that amount via a dedicated microSD card slot.

The Tecno Spark 7P comes with a 3.5mm headphone jack and Dirac Stereo Sound Effect. It also has a rear-mounted fingerprint scanner and a huge 5,000mAh battery. Unfortunately, there is no mention of fast charging. The phone runs Android 11 which includes HiOS 7.5. The phone is available in Alps Blue, Spruce Green, Magnet Black, and Summer Mojito colorways. It will reach global markets very soon. Unfortunately, the actual price will be revealed at a later date.