Samsung has pretty much revolutionized its smartphone division with the introduction of the Galaxy A and M series. After many years of pushing smartphones with tepid hardware through controversial lineups, the brand now has many smartphones with decent hardware under affordable price steps. This year, the company is giving a step further to improve its mid-rangers with the inclusion of 5G connectivity. The brand introduced its Galaxy A52 5G and Galaxy A72 5G recently and many more devices will come. One of the most exciting additions coming to Samsung’s portfolio is the Galaxy A22 5G which will make its debut with Dimensity 700 SoC. The new smartphone has just appeared on GeekBench Benchmark which confirms its main specs. 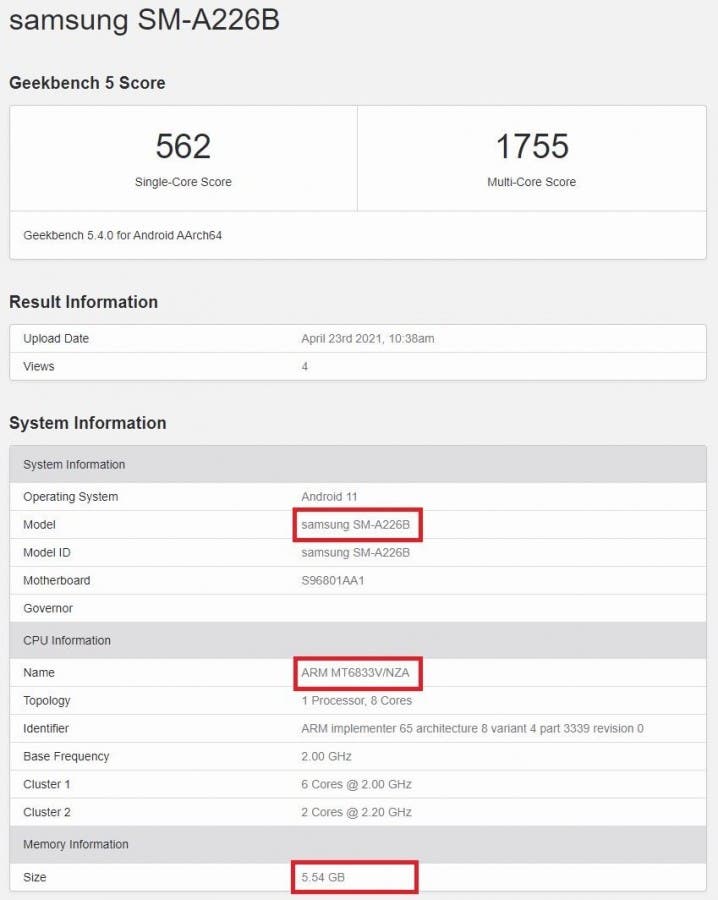 The Galaxy A22 5G sports the SM-A226B model number and it’s confirmed with the Dimensity 700. After all, the handset ran GeekBench with an MT6833V/NZA chipset which is the codename of Dimensity 700. For those unaware, this chipset has two Cortex-A76 cores clocked at 2.2GHz paired with six Cortex-A55 cores clocked at up to 2.0GHz. The smartphone also comes with a Mali-G57 MC2 GPU. The Galaxy A22 5G will come with 6GB of RAM and we assume that this amount will be accompanied by 128GB of Internal Storage. The phone certainly offers microSD card support. The last detail revealed by GeekBench is the fact that it runs Android 11. Not a big surprise at this point, but we can expect it to come with One UI 3.1 on top. The device scores 562 points in the single-core test and 1,765 points in the multi-core department. Yesterday, a couple of renders emerged revealing the design.

Other reports suggest that the smartphone will come with a Quad-Camera setup. It comprises a primary 48MP shooter, an 8MP ultrawide snapper, a 2MP macro lens, and a 2MP depth-sensing module. The front will house an Infinity-V screen which we assume has HD+ resolution and is an LCD. The teardrop notch will house a 13MP selfie snapper. As per a leaked Samsung launch roadmap, the new smartphone will hit the shelves in July with a price tag close to $200. It’s curious to see a device that is expected to launch in two months stealing the headlines so often. However, this is a big surprise if you’re used to Samsung launches. If you recall, the Galaxy A52 and A72 have leaked in January but only hit the market in March. Samsung clearly isn’t good in holding secrets.