Samsung is finally adding 5G connectivity to its budget smartphones. Early this year, the company brought 5G mid-rangers in the form of the Galaxy A22 5G and Galaxy A72 5G. The company is also gearing up to launch a Galaxy M42 5G on April 28 as one of its cheapest 5G smartphones. However, it may not be the cheapest as we believe that this title will belong to the Galaxy A22 5G. The company is gearing up to launch a new member for the Galaxy A-series and judging by its number it will be cheap. Today, a couple of renders emerged revealing some key aspects of the Galaxy A22 5G design. As you may expect, its design screams that it’s a mid-range smartphone.

The Galaxy A22 5G is the SM-A226B smartphone that has been leaking a lot recently. Today, a couple of CAD-based renders confirm the smartphone 6.5-inch Infinity-V style waterdrop notch instead of a punch-hole, or Infinity-O, a screen like its predecessor the Galaxy A21. The leak also confirms the smartphone dimensions as 167.2 x 76.4 x 8.7mm. If you consider the camera bump, then the total thickness grows to 9.7mm. 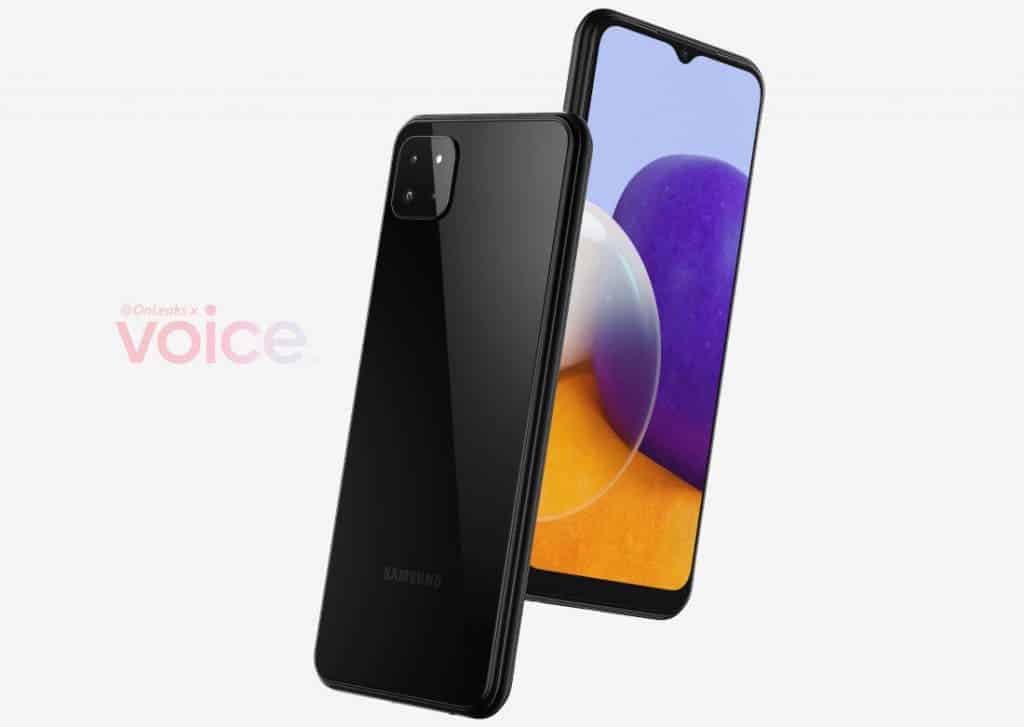 Interestingly, we can also spot a side-mounted fingerprint scanner through the new renders. The phone also has a 3.5mm headphone jack in the bottom, and we assume that it has a USB-C port alongside. Moving on to the rear, we can see a Triple-Camera setup comprised of a rectangular island. According to previous rumors, the phone comprises a primary 48MP camera, an 8MP camera probably for ultrawide, and two additional 2MP modules. We assume that the last sensors are macro and depth units. Selfies will be captured by a 13MP front-facing snapper.

The Galaxy A22 5G will come with Dimensity 700 SoC

As per the rumors, the Galaxy A22 5G is likely coming with a MediaTek Dimensity 700. This is the most cost-effective 5G chipset offered by the Taiwanese chipmaker at the moment. It has two ARM Cortex-A76 cores clocked at up to 2.2GHz and six ARM Cortex-A55 cores clocked at up to 2GHz. For graphical tasks, this GPU has a Mali-G57 MC2 GPU. We believe that the Galaxy A22 5G will have a common LCD with HD+ resolution and a standard 60Hz refresh rate. A battery with 5,000mAh is expected with 18W fast-charging in the best-case scenario.

According to the leaked launch date roadmap, the Galaxy A22 5G will be released alongside a vanilla A22 in July.