Chinese manufacturing giant, Xiaomi, recently released its latest smart band, Xiaomi Mi Band 6. This morning, the company’s CEO, Lei Jun, took to his official Weibo handle to announce that the sales of the Xiaomi Mi Band 6 now exceed one million units. Recently, the company announced a limited commemorative gift box for Xiaomi smart bands. This box contains the Mi Band 6 and other bands from the previous generations. However, Xiaomi did not say whether or not it will sell this box. 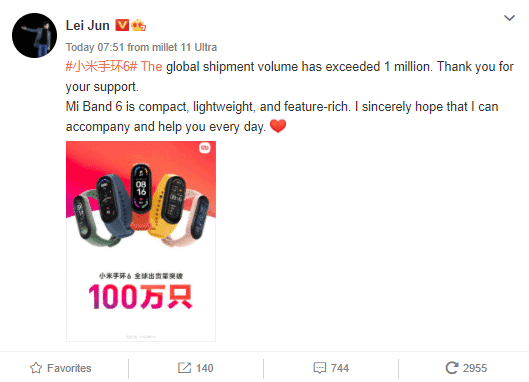 Xiaomi has been in the smart band market for about seven years. Its first-generation smart band, Xiaomi Mi Band 1 was released in 2014. This band supports monitoring of exercises and sleep quality. It has no display and hit the shelves for 79 yuan ($12).

The second generation is the Xiaomi Mi Band 2 which hit the market in 2016. This device comes with a 0.42-inch OLED display and supports other functions. Some of the features are raising the wrist to brighten the screen, and heart rate detection.

In 2018, Xiaomi officially released the Xiaomi Mi Band 3, its third-generation Mi band. This device adopts a sleek design with a console shape and a larger screen. Its screen can display 24 Chinese characters and it’s the first in the series to have an NFC version. The standard version of this device has a 169 yuan ($26) launch price. However, the NFC version had a 199 yuan ($31) launch price.

The 4th generation Xiaomi Mi Band 4 was released in 2019. It comes with an AMOLED color screen and supports payment by Xiaoai and Alipay. The standard version has the same price as the previous generation, 169 yuan ($26). However, the NFC version is selling for 229 yuan ($35).

The Xiaomi Mi Band 5 which is the company’s 5th generation Mi Band was released in 2020. The screen size and brightness are better relative to the previous generation. It adds a dynamic dial and uses magnetic charging. While the standard version of this smart band sells for 189 yuan ($29), the NFC version is going for 229 yuan ($35)

In the spring of 2021, Xiaomi unveiled its 6th generation smart band, Xiaomi Mi Band 6. This device uses an AMOLED full screen with a 50% increase in the display area. It adds new features like blood oxygen saturation monitoring function. The standard version sells for 229 yuan ($35) and the NFC version goes for 279 yuan ($43).

Next Konami plans to remake the "Metal Gear Solid" series