Microsoft’s traditional yearly conference will not be beaten in 2021. The company confirmed in a press release that Microsoft Build 2021 will take place between May 25th and 27th and, of course, it will be completely virtual.

The website clearly wants to anticipate the main theme that will be discussed during the event. It currently has the phrase: “explore what’s next in technology and the future of hybrid work”. It also highlights that developers will be able to find solutions, hones their skills, and also call them to look at “what you can add to your toolbox” during the event.

Microsoft may give a greater focus to future versions of its main operating system. After all, this is what developers and, of course, users and enthusiasts want to see at the conference. We expect more than just incremental changes this time around. While the company will certainly keep its focus in Windows 10, we’re expecting major overhauls in design and new features to better adapt to 2021 demands.

With a three-day duration, the first day of Build 2021 should be the main one. We believe that Microsoft CEO, Satya Nadella, should reveal news related to Windows, as well as other important company members. The other two days of Microsoft Build 2021 will likely focus even more on resources for developers.

The main event will take place throughout the afternoon of May 25th, with the main keynotes taking place around noon.

In the latest report prepared by AdDuplex, an increase in platforms running the 2004 and 20H2 versions of the Microsoft operating system was analyzed. It represents 80% of the total Windows 10 user base today. The data was collected through 5,000 Microsoft Store applications that use AdDuplex SDK v.2 or higher. 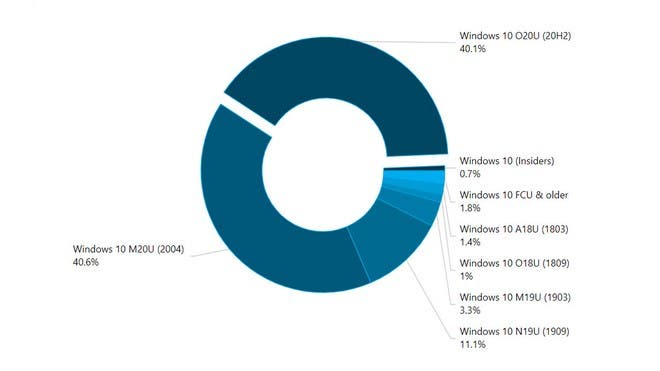 The analysis used samples based on 70 thousand users. According to the research, version 20H2, launched in October 2020, increased the number of users by 10.2% since the last analysis made in March. It represents 40.1% of the total number of computers running Windows 10. The previous version, in turn, is still present on most PCs with 40.6%. The expectation is that the most recent distribution will be the majority in the next month.

With the fast and incessant rate of adhesion to the most recent distribution, the system should dominate until the future update. The new update, presumably 21H1 probably will reach users by the end of June. For now, fans of the tester program can now interact with the latest builds of the new version of the system. It features a redesigned interface and improved disk tools.