Vivo is well known for launching multiple variants of its smartphones. The company isn’t shy about rebranding, if you recall, there is a multitude of smartphones sporting the same Vivo V20 Pro-esque design in the market. The company also unveils several devices for each of its smartphone series. There is a Vivo Y20, Y20S, and even Y20S [G]. Now, the company is ready to unveil a new variant of an existing device, or more specifically, a new upgraded 2021 edition. The Vivo Y12s which was revealed in December is about to receive a sequel carrying Vivo Y12s 2021 moniker.

The new smartphone has appeared on Google Play Console and Indonesia Telecom certification websites, as spotted by Pricebaba. While the latter hasn’t revealed much about the handset’s hardware, the former lists out some key specifications. It suggests a notable upgrade over the last year’s model. Unfortunately, the listing lack any kind of render to confirm the smartphone’s design. It can be based on the vanilla Y12s, but can also be based on other existing Vivo smartphones. In the best-case scenario, it will bear a brand new design. For now, let’s just think that it carries similarities with the Y12s but has better hardware. 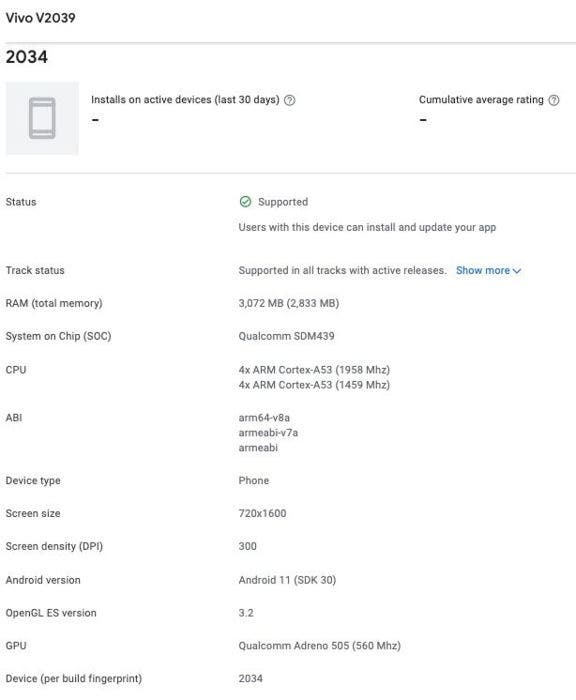 According to the Google Play console, the new Vivo Y12s 2021 will pack the Qualcomm Snapdragon 439 SoC and an Adreno 505 GPU. That’s not the best chipset in the world, especially now that there are many better options. However, this still is much better than the MediaTek Helio P35 that was part of the previous Y12s. We can clearly see that Vivo wants to keep the super-budget aspect of this smartphone. Apart from the new chip, the phone comes with 3GB of RAM and an HD+ display with 1,600 x 720 pixels and 300 PPI. On the software front, it comes with Android 11-based FuntouchOS 11. At the moment storage is unclear, but we can expect it to start with 32GB or 64GB in the best-case scenario.

The last year’s model arrived with a 6.35-inch LCD with HD+ resolution. Under the hood, it has the Helio P35 plus the same 3GB of RAM with 32GB of Storage. The handset runs Android 11 straight out of the box and comes with a side-mounted fingerprint scanner. The camera department is rather modest with a primary 13MP camera and a secondary depth sensor. One of the main selling points is the 5,000mAh battery.

We expect more details to be confirmed in the coming weeks.