According to Strategy Analytics, Samsung is no longer the #1 5G smartphone seller. At the end of the first quarter, the South Korean giant lost first place to Apple, which took the lead thanks to the iPhone 12 line, which received support for fifth-generation networks and was quite actively purchased by users in the United States, China and Europe. Therefore, Apple’s leadership position turned out to be predictable.

According to analysts, in the first quarter of this year, 40.4 million iPhones with 5G support were sold; and this allowed it to control almost a third of the smartphone market – 30.2%. Surprisingly, Oppo came in second with 21.5 million 5G smartphones and a 16.1% market share. Vivo closed the top three with a result of 19.4 million delivered mobile devices; with support for fifth-generation networks, and its market share is estimated at 14.5%.

5G smartphone sales have skyrocketed and Apple is in the lead 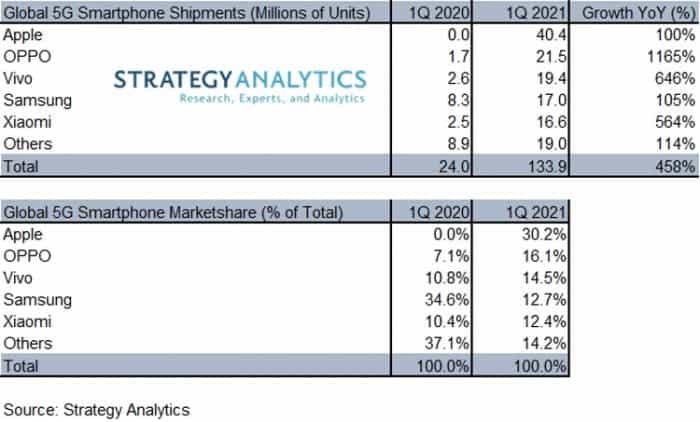 According to the results of the first three months of this year; Samsung was on the fourth line in the ranking; and its share decreased by almost three times compared to the results of the first quarter of 2020. Now the 5G smartphones of the South Korean giant account for 12.7% of the market against 34.6% a year earlier. The shipments of Samsung devices with support for fifth-generation networks amounted to 17 million.

Xiaomi managed to break into the top 5, which showed growth, and its share in the 5G smartphone segment was 12.4% and 16.6 million gadgets delivered. It is noteworthy that the demand for mobile devices with support for fifth-generation networks has increased by almost 5.5 times. If in the first quarter of last year shipments of 5G smartphones were 24 million; then this is already 133.9 million.

“The surge in the 5G volume in China, allied with the Apple factor, inevitably had a negative impact on Samsung’s share despite impressive product diversity from Samsung in 5G,” Woody Oh, a director at Strategy Analytics, said.

“Apple’s iPhone 12 5G is proving wildly popular across China, Europe and the United States, due to its sleek hardware design and surprisingly competitive pricing,” it said.