Samsung is preparing a new wave of Galaxy A(x)2 and M(x)2 smartphones. The company has achieved success in the recent year most likely due to the good pricing and decent specifications these devices are offering. In 2021, the brand is finally adding 5G connectivity to more of its mid-range smartphones. Last month, it introduced the Galaxy A52 and A72 5G. This month it revealed the Galaxy M42 5G and in a near future, it will reveal its cheapest 5G smartphone, the Galaxy A22 5G. However, Samsung’s crescent portfolio of smartphones will not be only made of 5G devices. Apparently, the company is preparing a new cost-effective smartphone dubbed Galaxy M32.

The Galaxy M30 series has been quite succesful since its insertion in the market. For that reason, there are some high expectations on the Galaxy M32 shoulders. The device has appeared today on GeekBench Benchmark which brings some neat details about its specifications. 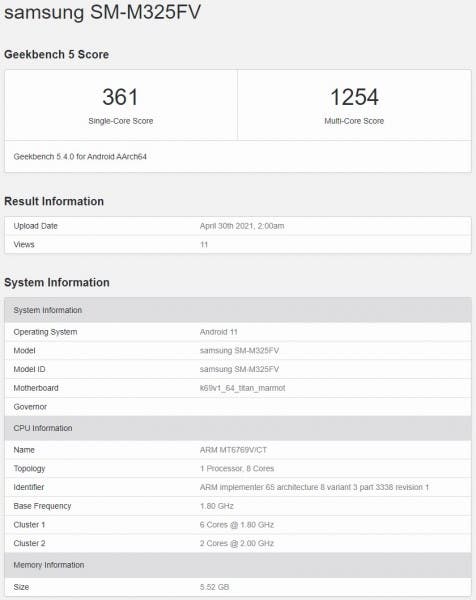 According to the popular benchmarking platform, the Galaxy M32 will reach the market with the SM-M325FV model number. The device in question runs with 6GB of RAM onboard, which is quite generous for an entry-level smartphone. Moreover, it comes with Android 11 which suggests One UI 3.1 straight out of the surprise. Under the hood, it carries a MediaTek MT6769V/CT. This chipset is the MediaTek Helio G80 SoC. We’re sure that not everyone will enjoy this chipset choice at this point. While decent, the Helio G80 is already overcome by other offerings in the market. We assume Samsung is focusing on a low pricing point and the chipset was the best possible choice to achieve it.

However, the Galaxy M32 with model number SM-M325F, appeared on the DEKRA database last week with a 6,000mAh battery. Some reports suggest that the handset will be based on the Galaxy A32 4G. This device has an Helio G80, 6.4-inch FullHD+ 90Hz AMOLED screen, in-display fingerprint scanner, a 5,000mAh battery with 15W fast-charging. We assume that the new phone may retain most of these specs but upgrade the battery to 6,000mAh capacity.