Although Huawei has been developing the HarmonyOS for many years, this system hit the public domain after the ban on Huawei by the U.S. The Chinese manufacturer has been working on this system and it is already available for some Huawei smartphones. However, it is the beta version that is available for now. Nevertheless, we expect the first public beta to arrive soon. 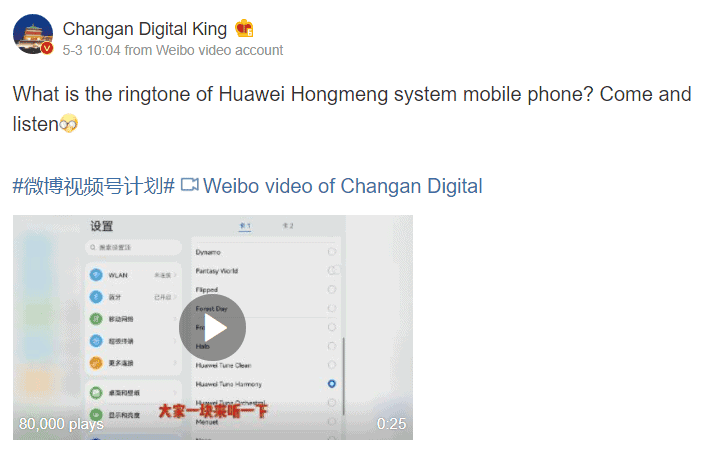 Late last month, Huawei HarmonyOS 2.0 commenced beta testing. Users that registered for this beta testing already have the update from Huawei. For those who have this system, their system core is now HarmonyOS instead of EMUI 11. However, there is a recent report regarding the Huawei HarmonyOS official ringtone.

According to a Weibo leakster Changan Digital King, Huawei has a “new” official ringtone on the HarmonyOS for mobile. However, this “new” ringtone is still based on the original version but with a few changes. We can obviously feel the different auditory experiences.

So far, it appears that the HarmonyOS 2.0 for smartphones is doing pretty well. In fact, the acceptance level is way higher than the expectation. There have been no significant complaints or bugs in the new system. From the user feedback so far, the system is perfect for daily use. The overall performance is an improvement to the EMUI 11 and it consumes less battery. Of course, there are some users that believe that it is better than Android in some aspects. Nevertheless, we will wait for the official stable version before we have a conclusion on that.

HarmonyOS to run on 300 million devices this year

According to Wang Chenglu, President of Huawei’s Consumer Business Software Department and Head of AI, HarmonyOS offers a unifying language for intelligence, interconnection, and collaboration of different devices. He claims that the HarmonyOS will run on 300 million units of devices this year. This includes smartphones, tablets, and other IoT devices.

“But we see that the mobile Internet industry, which centers on mobile phones, is under pressure. Global smartphone shipments have declined since 2018 and will drop by about 6% year-on-year in 2020. At the same time, consumers use mobile phones for basically 4 to 5 hours per day. This has been the statistics for smartphone usage since 2018. These indicate that the industry has reached a critical moment when it must be transformed”.

Do you think HarmonyOS has what it takes to compete with the heavyweights (Android & iOS) in the market? Let us know your thoughts in the comment section below