In addition, he also revealed that the Ryzen version of RedmiBook Pro will be released at the end of this month.

According to speculations, the Xiaomi Mi Pad 5 series will have two products. This series will have the Xiaomi Mi Pad 5 and Mi Pad 5 Pro. The Pro version will focus on the high-end market and will use a 2K resolution LCD screen that supports a 120Hz refresh rate and 240Hz touch sampling rate. It also supports 4096-level touch control and In-Cell active pen technology. This device will have a more delicate and smooth display effect than many large-screen devices. Under the hood, this device will have the MediaTek Dimensity 1200 chip. The Mi Pad 5 will be equipped with the Snapdragon 870 chip.

Furthermore, a leak of the Xiaomi Mi Pad 5 user interface shows that it uses a special MIUI for Pad system. The system will have a new interface that will support full-screen gestures. Just like the iPad Pro, the Mi Pad 5 will have a full-screen solution. 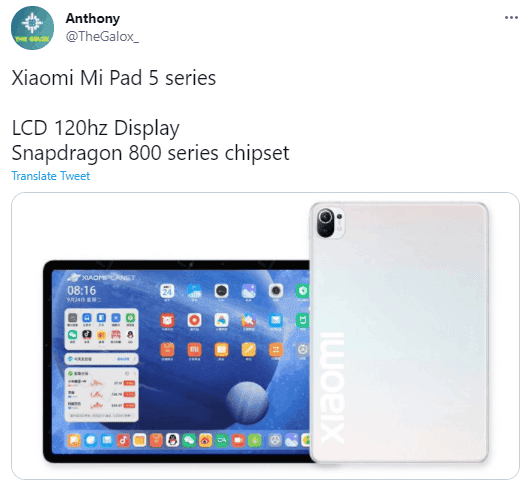 In addition to the core performance, the Mi Pad 5 will also use a tablet system similar to the Mi MIX FOLD folding screen. Thus we expect some special features like the handheld PC mode, dual-screen drag and drop, parallel windows, and more.

Since it has been many years since Xiaomi released a tablet, do you think Xiaomi will make an instant impact with the Pad 5? Do well to let us know your thoughts in the comment section below

Previous Realme V25 might be launching soon with these specifications